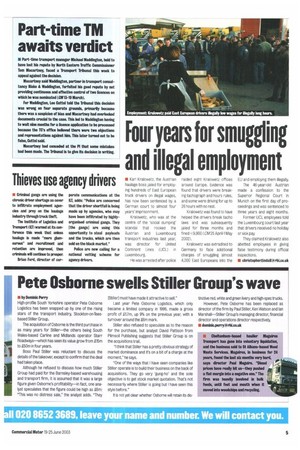 • Part-time transport manager Michael Waddington, held to have lost his repute by North Eastern Traffic Commissioner Tom Macartney, faced a Transport Tribunal this week to appeal against the decision.

Macartney said Waddington, partner in transport consultancy Blake & Waddington, forfeited his good repute by not providing continuous and effective control of two licences on which he was nominated (0M13-19 March).

For Waddington, Lee Cuttel told the Tribunal this decon was wrong on four separate grounds, primarily because there was a suspicion of bias and Macartney had overlooked documents crucial to the case. This led to Waddington having to wait nine months for a licence application to be processed because the TC's office believed there were two objections and representations against him. This later turned out to be false, Cutts! said.

Macartney had conceded at the PI that some mistakes had been made. The Tribunal is to give its decision in writing.