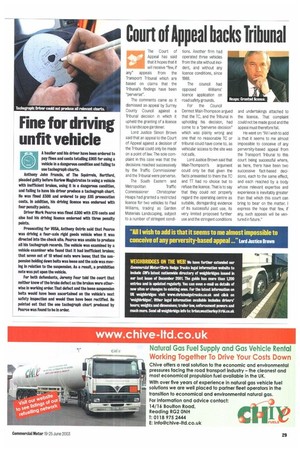 The Court of Appeal has said that it hopes that it will receive "few, if any" appeals from the Transport Tribunal which are based on claims that the Tribunal's findings have been "perverse".

The comments came as it dismissed an appeal by Surrey County Council against a Tribunal decision in which it upheld the granting of a licence to a landscape gardener.

Lord Justice Simon Brown said that an appeal to the Court of Appeal against a decision of the Tribunal could only be made on a point of law. The sole complaint in this case was that the decisions reached successively by the Traffic Commissioner and the Tribunal were perverse.

The South Eastern and Metropolitan Traffic Commissioner Christopher Heaps had granted a restricted licence for two vehicles to Paul Williams, trading as Garden Materials Landscaping, subject to a number of stringent condi tions. Another firm had operated three vehicles from the site without incident, and without any licence conditions, since 1988.

For the Council Dermot Main-Thompson argued that the TC, and the Tribunal in upholding his decision, had come to a "perverse decision" which was plainly wrong and one that no reasonable TC or tribunal could have come to, as vehicular access to the site was not safe.

Lord Justice Brown said that Main-Thompson's argument could only be that given the facts presented to them the TC and 7 had no choice but to refuse the licence. That is to say that they could not properly regard the operating centre as suitable, disregarding evidence of its successful past use, its very limited proposed further use and the stringent conditions and undertakings attached to the licence. That complaint could not be made good and the appeal must therefore fail.

He went on: "All I wish to add is that it seems to me almost impossible to conceive of any perversity-based appeal from the Transport Tribunal to this court being successful where, as here, there have been two successive fact-based decisions, each to the same effect, and each reached by a body whose relevant expertise and experience is inevitably greater than that which this court can bring to bear on the matter. I express the hope that few, if any, such appeals will be ventured in future."