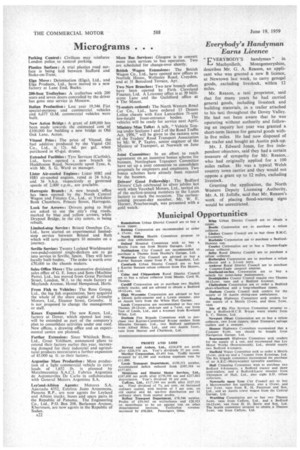 Page 24, 19th June 1959 — Micrograms . . .
Close
Noticed an error?
If you've noticed an error in this article please click here to report it so we can fix it.
Keywords : Geography Of England, Geography Of The United Kingdom, Counties Of England, Leyland Motors, Albion Motors, Harrogate, Automotive Industry, Grimsby

Plastics Surface: A trial plastics road surface is being laid between Stafford and Stoke-on-Trent.

200-Seat Trolleybus: A trolleybus with 200 seats and seven doors controlled by the driver has gone into service in Moscow.

Vitasul Price: The price of Vitasul, the fuel additive produced by the Vigzol Oil Co., Ltd., is 12s. 6d. per gal. when purchased in 45-gal. drums.

Look for Arrows: Drivers going to Hull are asked to use the city's ring roads, marked by blue and yellow arrows, while Drypool Bridge, in the city centre, is being rebuilt.

Limited-stop Service: Bristol Omnibus Co., Ltd., have started an experimental limitedstop service between Bristol and Bath which will save passengers 10 minutes on a journey.

Seville Service: Twenty Leyland Worldmaster two-pedal-control single-deckers are to go into service in Seville, Spain. They will have locally built bodies. The order is worth over £70.000 to the chassis makers.

From Fish to Vehicles: The Ross Group, Ltd., the big fish organization, have acquired the whole of the share capital of Grimsby Motors, Ltd., Eleanor Street, Grimsby. It is not proposed to change the management or staff.

Kenex Expansion: The new Kenex, Ltd., factory at Dover, which opened last year, will be extended as part of the company's plan to consolidate activities under one roof. New offices, a drawing office and an experimental centre are planned.

Further Extension: Since Whitlock Bros., Ltd.. Great Yeldham, announced plans to extend their factory earlier this year. increasing demand for their industrial and agricultural products necessitates a further expansion of 45.000 sq ft. to their factory.

Two New Branches: Two new branch offices have been opened by Firth Cleveland Finance, Ltd. A Leicester office is at 39 Millstone Lane and the Guildford office at 4 The Mount.

Ministry Man Talks: A talk, "Vehicle Testing under Sections 1 and 2 of the Road Traffic Act, 1956," will be given to the eastern area of the Traders' Road Transport Association by Mr. W. P. Tapley, senior engineer of the Ministry of Transport, at Norwich on June 25.

Joint Committee: In an effort to reach agreement on an incentive bonus scheme for busmen, Nottingham Transport Committee have set up a joint committee to consolidate proposals by employers and employees. Two bonus schemes have already been rejected by the busmen.