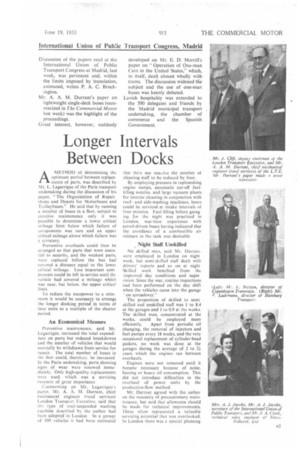 Page 39, 19th June 1953 — International Union of Pu bic
Close
Noticed an error?
If you've noticed an error in this article please click here to report it so we can fix it.

Discussion of the papers read at the International Union of Public Transport Congress at Madrid, last week, was persistent and, within the limits imposed by translation, animated, writes P. A. C. Brockington.

Mr. A. A. M. Durrant's paper on lightweight single-deck buses (summarized in The Commercial Motor last week) was the highlight of the proceedings.

Great interest, however, suddenly developed on Mr. E. D. Merrill's paper on "Operation of One-man Cars in the United States," which, in itself, dealt almost wholly with trams. The discussion widened the subject and the use of one-man buses was keenly debated.

Lavish hospitality was extended to the 500 delegates and friends by the Madrid municipal transport undertaking, the chamber of commerce and the Spanish Government.