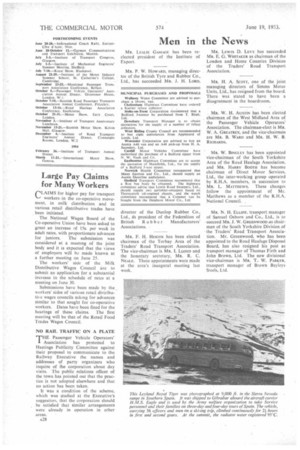 Page 30, 19th June 1953 — Men in the News
Close
Noticed an error?
If you've noticed an error in this article please click here to report it so we can fix it.

MR. LESLIE GAMAGE has been reelected president of the Institute of Export_

director of the Dunlop Rubber Co., Ltd., As president of the Federalion of British Rubber Manufacturers' Associations. • Ma. F. H. Hiscox has been elected chairman of the Torbay Area of the Traders' Road Transport Association. The vice-chairman is MR. I. LLOYD and the honorary secretary, MR. R. C. NEALE. These appointments were made at the area's inaugural meeting last week.

MR. H. A. Scarr, one of the joint managing directors of Simms Motor Units, Ltd., has resigned from the board. There was stated to have been a disagreement in the boardroom.

Ma. W. H. AUSTIN has been elected chairman of the West Midland Area of the Passenger Vehicle Operators' Association. The chairman-elect is MR, W. A. GREATREX, and the vice-chairmen are MR. B. WARD and MR. H. W. B. Rio-Yams.

MR. W. BINGLEY has been appointed vice-chairman of the South Yorkshire Area of the Road Haulage Association, and MR. HARRY BOOTH has become chairman of Direct Motor Services, Ltd., the inter-working group operated by R.H.A. members, in succession to MR. L. MATTHEWS. These changes follow the appointment of Mr. Matthews as a member of the R.H.A. National Council.

• the Traders' Road Transport Association, Mr. Greenwood, who has been appointed to the Road Haulage Disposal Board, has also resigned his post as transport manager of Thomas Firth and John Brown, Ltd. The new divisional vice-chairman is MR, T,. W. PARKER, transport manager of Brown Bayleys Steels, Ltd.