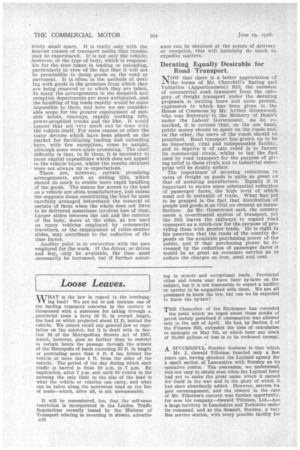 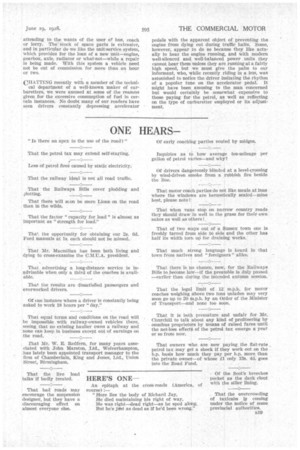 Page 44, 19th June 1928 — Loose Leaves.
Close
Noticed an error?
If you've noticed an error in this article please click here to report it so we can fix it.
Keywords : Truck, Carburetor, Automobile

WHAT is the law in regard to the overhangV V ing load? We are led to ask because one of the leading transport concerns in the country is threatened with a summons for taking through a

_ provincial town a lorry 26 ft. in overall length, the load on which projected about 11 ft. behind the vehicle. We cannot recall any general law or regulation on the subject, but it is dealt with in Section 16 of the Metropolitan Streets Act of 1867, which, however, goes no farther than to restrict to certain hours the passage through the streets of the Metropolis of loads exceeding 35 ft. in length or protruding more than 8 ft. 6 ins, behind the vehicle or more than 1 ft. from the sides of the vehicle. The period of the day during which such traffic is barred is from 10 a.m. to 7 p.m. By implication, after 7 p.m. and until 10 o'clock in the morning the only limit to the size of the load is what the vehicle or vehicles can carry, and what can be taken along the narrowest road on the line of route—which, after all, is not unreasonable.

It will be remembered, too, that the self-same restriction is incorporated in the London Traffic Regulations recently issued by the Minister of Transport relating to reversing in streets, advertisn18

ing in streets and exceptional loads. Provincial cities and towns may have their by-laws on the subject, but it is not reasonable to expect a haulier or carrier to be acquainted with them. We are all presumed to know the law, but can we be expected to know the by-law?

THE Chancellor of the Exchequer has conceded the point which we urged about those stocks of petrol unduly penalized if consumption was allowed only to the end of April. He has, by Section 2 of the Finance Bill, extended the time of calculation to midnight on May 7th, at which hour any stock of 10,000 gallons or less is to be reckoned exempt.

A SUCCESSFUL Burnley business is that which Mr. J. Oswald Tillotson founded only a few years ago, having obtained the Leyland agency for a small section of Lancashire with Burnley as its operative centre. The concession, we understand, was not easy to obtain even when the Leyland lorry had yet to make the great name which it earned for itself in the war and to the glory of which it has since abundantly added. However, success hogets encouragement, and the reward in the case of Mr. Tillotson's concern was further opportunity, for now his company—Oswald Tillotson, Ltd.—has a large territory in Lancashire and Yorkshire under Its command, and at the Summit, Burnley, a very fine service station, with every possible facility for

• attending to the wants of the user of bus, coach or lorry. The'. stock of spare parts is extensive, and in particular do we like the unit-service system, which provides for the loan of a new unit—engine,' gearbox, axle, radiator or what-not—while a repair is being made. With this system a vehicle need not be out of commission for more than an hour • or two.

CHATTING recently with a member of the techni

cal department of a well-known maker of carburetters, we were amused at some of the reasons given for the excessive consumption of fuel in cer, tain instances. No doubt many of our readers have seen drivers constantly depressing accelerator

pedals with the apparent object of preventing the engine from dying out during traffic halts. Some, however, appear to do so because they like actually to hear the engine running, and with modern well-silenced and well-baIanced power units they cannot hear them unless they are running at a fairly high speed, but we must give the palm to our informant, who, while recently riding in a bus, was astonished to notice the driver imitating the rhythm of a popular tune on the accelerator pedal. it might have been amusing to the man concerned but would certainly be somewhat expensive to those paying for the petrol, as well as reflecting on the type of carburetter employed or its adjustment.