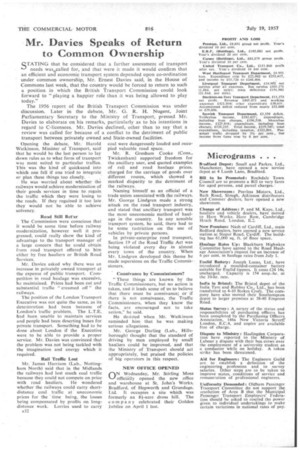 QTATING that he considered that a further assessment of transport '—' needs wasscalled for, and that were it made it would confirm that an efficient and economic transport system depended upon co-ordination under common ownership, Mr. Ernest Davies said, in the House of Commons last week, that the cOuntry would be forced to return to such a position in which the British Transport Commission could look forward to " playing a happier role than it wa-s being allowed to play today."

The 1956 report of the British Transport Commission was under discussion. Later in the debate, Mr. G. R. H. Nugent, Joint Parliamentary Secretary to the Ministry of Transport, pressed Mr. Davies to elaborate on his remarks, particularly as to his intentions in regard to C-licensees. Mr. Davies declined, other than to say that a review was called for because of a conflict to the detriment of public transport between privately owned and State-owned facilities.

Opening the debate, Mr. Harold Watkinson, Minister, of Transport, said that he would be the last person to lay down rules as to what form of transport was most suited to particular traffics. This was the kind of quicksand into which one fell if one tried to integrate or plan these things too closely.

He was worried about whether the railways would achieve modernization of their goods services in time to regain the traffic which they were losing to the roads. If they regained it too late they would not be able to achieve solvency.

Road Still &ter The Commission were conscious that it would be some time before railway modernization, however well it progressed, could really show the kind of advantage to the transport manager of a large concern that he could obtain from road transport offered to him either by free hauliers or British Road Services.

Mr. Davies asked why there was an increase in privately owned transport at the expense of public transport Competition in road haulage was excessive, he maintained. Prices had been cut and substantial traffic "creamed off" the railways.

The position of the London Transport Executive was not quite the same, as its deterioration had been because of London's traffic problem. The L.T.E.. had been unable to maintain services and people had been deserting buses for private transport. Something had to be done about London if the Executive were to be able to provide a proper service. Mr. Davies was convinced that the problem was not being tackled with the imagination and energy which it required.

Rail Traffic Lost Mr. James Harrison (Lab., Nottingham North) said that in the Midlands the railways had lost much coal traffic because they could not compete on price with road hauliers. He wondered whether the railways could carry shortdistance coal traffic at uneconomic prices for the 'time being, the losses being compensated by profits on longdistance work. Lorries used to carry 432 coal were dangerously loaded and occupied valuable road space.

Mr. R. Gresham Cooke (Cons., Twickenham) supported freedom for the ancillary user, and quoted examples of rail and road haulage Prices, charged for the carriage of goods over different routes, which showed a marked disparity to the detriment of the railways.

Naming himself as an official of a trade union associated with the railways, Mr. George Lindgren made a strong attack on the road transport industry, and stated that ancillary transport was the most uneconomic method of haulage in the country. In any sensible transport system, he said, there had to be some restriction on the use of vehicles by private persons.

In private-enterprise road transport, Section 19 of the Road Traffic Act was being violated every day in almost every town of the country. When Mr. Lindgren developed this theme he made aspersions on the Traffic Commissioners.

He desisted when Mr. Watkinson reminded him that he was making serious allegations.

Mr. George Darling (Lab., Hillsborough) thought that the standard of driving by men employed by small hauliers could be improved, and that the Ministry of Transport should act appropriately, but praised the policies of big operators in this respect.

co Wednesday, Mr. Stirling Moss officially opened the new office and warehouse at St. John's Works, Bradford, of Hepworth and Grandage, Ltd. It occupies a site which was formerly an 84-acre dross hill. The company celebrated their Golden Jubilee on April 1 last.