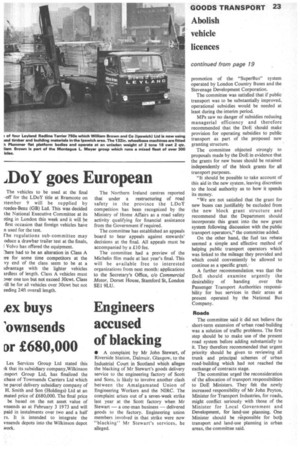 Page 25, 19th January 1973 — Engineers accused of blacking
Close
Noticed an error?
If you've noticed an error in this article please click here to report it so we can fix it.
Keywords : Amalgamated, Strike Action, Politics, Law / Crime, Labor

• A complaint by Mr John Stewart, of Riverside Station, Dalinuir, Glasgow, to the Industrial Court in Scotland which alleges the blacking of Mr Stewart's goods delivery service to the engineering factory of Scott and Sons, is likely to involve another clash between the Amalgamated Union of Engineering Workers and the NIRC. The complaint arises out of a seven-week strike last year at the Scott factory when Mr Stewart — a one-man business — delivered goods to the factory. Engineering union members involved in that strike were now "blacking– Mr Stewart's services, he alleged.