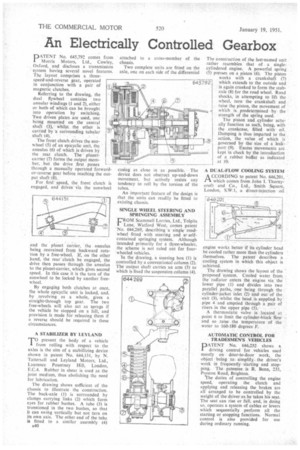 Page 58, 19th January 1951 — An Electrically Controlled Gearbox
Close
Noticed an error?
If you've noticed an error in this article please click here to report it so we can fix it.

PATENT No. 645,792 comes from Morris Motors, Ltd., Cowley, Oxford, and discloses a transmission system having several novel features. The layout comprises a threespeed-and-reverse gear, operated in conjunction with a pair of magnetic clutches.

Referring to the drawing, the dual flywheel contains two annular windings (1 and 2), either or both of which can be brought into operation by switching, Two driven plates are used, one being mounted oi . the central shaft (3), whilst the other is carried by a surrounding tubular shaft (4).

The front clutch drives the sunwheel (5) of an epicyclic unit, the annulus (6) of which is driven by the rear clutch. The • planet. carrier (7) forms the output member, but the drive first passes through a manually operated forwardor-reverse gear before reaching the output shaft (8).

For first speed, the front clutch is engaged, and drives via the sunwheel and the planet carrier, the annulus 'being restrained from backward rotation by a free-wheel. If, on the other hand, the rear clutch be engaged, the drive then passes through the annulus to the planet-carrier, which gives second speed. In this case it is the turn of the sunwheel to be locked by another freewheel.

By engaging both clutches at once, the whole epicyclic unit is locked, and, by revolving as a whole, gives a straight-through top gear. The two free-wheels will also act as sprags if the vehicle be stopped on a hill, and provision is made for releasing them if a reverse should be required in these circumstances.

A STABILIZER BY LEYLAND

T°prevent the body of a vehicle from rolling with respect to the axles is the aim of a stabillizing device shown in patent No. 644,131, by N. Tattersall and Leyland Motors, Ltd., Laurence Pountney Hill, London, E.C.4. Rubber in shear is used as the joint medium, thus abolishing the need for lubrication.

The drawing shows sufficient of the chassis to illustrate the construction. The back-axle (I) is surrounded by clamps carrying links (2) which form eyes for rubber bushes. A tube (3) is trunnioned in the two bushes, so that it can swing vertically but not turn on its own axis. The other end of the tube is fitted to a similar assembly (4)

casing as close in as possible. The device does not obstruct up-and-down movement, but actively resists any tendency to roll by the torsion of the tubes.

An important feature of the design is that the units can readily be fitted to existing chassis.

FROM Scammell Lorries, Ltd., Tolpits Lane, Watford West, comes patent 'No. 644,269, describing a single roadwheel fitted with steering and as selfcontained springing system. Although intended primarily for a three-wheeler, the scheme is not ruled out for fourwheeled vehicles.

In the drawing, a steering box (1) is controlled by a conventional column 2). The output shaft carries an arm (3) to which is fixed the suspension column (4). The construction of the last-named unit rather resembles that of a singlecylindered engine. A powerful spring (5) presses on a piston (6). The piston works with a crankshaft (7) which extends to the outside and is again cranked 'to form the stubaxle (8) for the road wheel. Road shocks, in attempting to lift the wheel, turn the crankshaft and raise the piston, the movement of wWch is predetermined by the strength of the spring used.

The piston and cylinder actually function as such, being, with the crankcase, filled with oil. Damping is thus• imparted to the action, the value of which is governed by the size of a leakport (9), Excess movements are kept in check by the introduction of a rubber buffer as indicated at 10.

ACCORDING to patent No. 646,201, ti which comes from John J. Thornycroft and Co., Ltd., Smith Square, London, S.W.1, a direct-injection oil engine works better if its cylinder head be cooled rather more than the cylinders themselves. The patent describes a cooling system in which this object is achieved.

The drawing shows the layout of the proposed 'system. Cooled water from the radiator enters the engine via the lower pipe (1) and divides into two parallel paths, one being through the cylinder-jacket inlet (2) and out. of the exit (3), whilst the head is supplied by pipe 4 and emptied through a pair of risers in the upper pipe (5).

A thermostatic valve is located at• point 6 to limit the cylinder-block flow and so raise the temperature of the water to 160-180 degrees F.

AUTOMATIC CONTROL FOR TRADESMEN'S VEHICLES DATENT No. 646,232 shows r. 1. driving control for vehicles used mostly on door-to-door work, the object being to. simplify— the driver's work in frequently starting and stopping. The patentee is R. Benn, 233, Preston Road, Brighton.

'the duties of controlling the engine speed, operating the clutch and applying and releasing the brakes are all arranged to be controlled by the weight of the driver as he takes his seat. The seat can rise or fall, and, in doing so, operates a system of cables or levers which sequentially perform all the starting or stopping functions. Normal control is also provided for use during ordinary running.