Seddon to Build Reos for Export 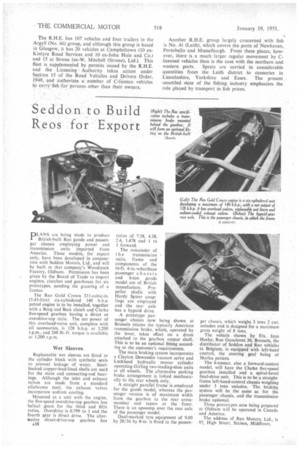 Page 56, 19th January 1951 — Seddon to Build Reos for Export
Close
Noticed an error?
If you've noticed an error in this article please click here to report it so we can fix it.
Keywords : Overdrive

PLANS are being made to produce British-built Reo goods and passenger chassis employing power and transmission units imported from America. These models, for export only, have been developed in conjunction with Seddon Motors, Ltd., and will be built in that company's Woodstock Factory, Oldham. Permission has been given by the Board of Trade to import engines, clutches and gearboxes for six prototypes, pending the granting of a licence.

Replaceable wet sleeves are fitted to the cylinder block with synthetic seals to prevent leakage of water. Steelbacked copper-lead-lined shells are used for the main and connecting-rod bearings. Although the inlet and exhaust valves are made from a standard silichrome steel, the exhaust valves incorporate sodium cooling.

the transmission units, frame and components of the I6-ft. 4-in.-wheelbase passenger chassis and 6-ton goods model are of British manufacture. Propeller shafts with Hardy Spicer couplings are employed and the rear axle has a hypoid drive.

A prototype passenger chassis now being shown Brussels retains the typically American transmission brake, which, operated by the lever, takes effect on a drum attached to the gearbox output shaft. This is to be an optional fitting according to the customer's requirements.

A straight parallel frame is employed for the goods model, whereas the passenger version is of maximum width from the gearbox to the rear crossmember and tapers at the front. There is an upsweep over the rear axle of the passenger model.

ger chassis, which weighs 3 tons 2 cwt. unladen and is designed for a maximum gross weight of 8 tons.

The vehicle shown by Ets. Jean Hocke, Rue Gaucheret.30, Brussels, the distributor of Seddon and Reo vehicles in Belgium, is equipped with left-hand control, the steering geaf being of Marks pattern.

The 6-tonner, also a forward-control model, will have the Clarke five-speed gearbox installed and a spiral-bevel final-drive unit. This is to be a straightframe left-hand-control chassis weighing under 3 tons unladen. The braking system will be the same as for the passenger chassis, and the transmission brake optional.

Three prototypes now being prepared at Oldham will be operated in Canada and America.