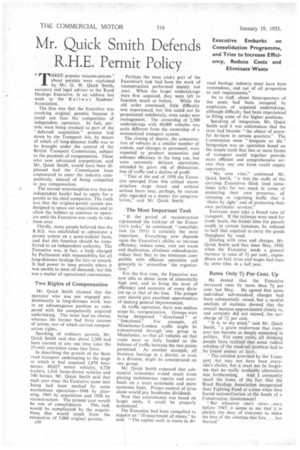 about permits were explained

by. Mr.. G. W. Quick Smith, secretary and legal adviser to the Road Haulage Executive, in an address last week to • the Railway. Students' Association.

The first was that the Executive was revoking original, permits because it could not face. the competition of independent operators. In fact, permits were being revoked as part of the "deferred acquisition" process laid down by the Transport Act, by means of which all long-distance traffic was to be brought under the control of the British Transport Commission, subject to the payment of compensation. Those who now advocated competition, said Mr. Quick Smith, would have been illpleased had the Commission been empowered to enter the industry competitively, instead of being compelled to pay compensation.

The second misconception was that an independent hauler had to apply for a permit to his chief competitor. The truth was that the original-permit system was designed to space out acquisitions and to allow the hcilders to continue to operaate until the Executive was ready to take them over.

Thirdly, many people believed that the R.H.E. was established to administer a permit system on a quasi-judicial basis, and that this function should he transferred to an independent authority. The Executive was, in fact, a body charged by Parliament with responsibility for all long-distance haulage for hire or reward. It had power to issue permits where it was unable to meet all demands, but this was a matter of operational convenience.

Mr. Quick Smith claimed that the operator who was not engaged predominantly in long-distance work, was in an advantageous position as compared with the compulsorily acquired undertaking. The latter had no choice. whereas the former had three courses of action, two of which carried compensation rights.

Speaking of ordinary permits, Mr. Quick Smith said that about 2.500 had been current at any one time since the 25-mile restriction came into force.

In describing the growth of the State road transport undertaking to the stage at which it had acquired 2.870 businesses, 40,027 motor vehicles, 4,720 trailers, 1,616 horse-drawn vehicles and 740 horses, Mr. Quick Smith said that each year since the Executive came into being had been marked by some momentous operation-1948 by planning, 1949 by acquisition and 1950 by reconstruction. The present year would be one of consolidation. This task would be complicated by the acquisition that would result from the revocation of 5.000 original permits. A36 Perhaps the most tricky part of the Executive's task had been the work of reconstruction performed mainly last year. When the larger undertakings. .were first acquired, they were left to function much as before. While the old order continued, little difficulty was experienced, but this could .not be perpetuated indefinitely, even under new management. The ownership of 2,500 undertakings with 40,000 vehicles was quite different from the ownership of a nationalized transport system.

The closing of depots, the concentration of vehicles in a smaller number of centres, and changes in personnel, were expected to produce economies and enhance efficiency in the long run, but were extremely delicate operations, attended by grave risk of dislocation, loss of traffic and a decline of profit.

" That at the end of 1950 the Executive emerged from this critical reconstruction stage intact and without serious harm may, perhaps, be reasonably regarded as a matter for congratulation," said Mr. Quick Smith.

The Most Important Task

"if the period of reconstruction represented the trickiest of the Executive's tasks," he continued. "consolidation (in 1951) is certainly the most important. Everything now depends upon the Executive's ability to increase efficiency, reduce costs, root out waste and duplication, eliminate redundancies, reduce their fleet to the minimum compatible with efficient operation and generally to ' streamline' the organization."

For the first time, the Executive was now able to detect items of abnormally high cost, and to bring the level of efficiency and economy of every division up to that of the best. The presont year should give excellent opportunities of making general improvements.

In traffic operation, there was endless scope fo, reorganization. Groups were being designated " directional " or " functional." For example, all Manchester-London traffic might be concentrated through ''one group in Manchester, so that all vehicles on that route were as fully loaded as the balance of traffic between the two points permitted. As another example, all livestock haulage in a district, or even in a division, might be concentrated on one group.

Now that accountancy was based dn larger units, it could be properly systemized.

The Executive had been compelled to acquire an " ill-assortment of stores," he said. "The capital sunk in stores in fly' road haulage industry must have been tremendous, and out of all proportion to real requirements."

As to staff, about three-quarters of the posts had been occupied by employees of acquired undertakings, although difficult/ had been experienced in filling some of the higher positions.

Speaking of integration, Mr. Quick Smith said it was unfortunate that the term had become "the object of scornful derision in certain quarters." The Commission must "integrate or die." Integration was an operation based on the simple truth that two or more forms of transport could together provide more efficient and comprehensive service than any one form could supply separately.

Everyone must take a broad view of transport. if the railways were used for trunk hauls, the transit time for parcels could, in certain instances, be reduced to half that required to carry the goods thoughout by road.

Dealing with rates and charges, Mr. Quick Smith said that since May, 1950. when the Executive made a general increase in rates of 7,1,per cent., expenditure on fuel, tyres and wages had risen by some £4m. in a full year.

Rates Only 7i Per Cent. Up

He denied that the Executive increased rates by more than 7 per cent. last May. He agreed that some individual sub-standard charges had been substantially raised, but a careful analysis of statistics showed that the overall increase approximated closely to, and certainly did not exceed, -the surcharge of 71 per cent.

"it is, to my mind," said Mr. Quick Smith, "a grave misfortune that transport has become so deeply enmeshed in politics. For some years, all thinking people have realized that some radical solution of the road-rail problem had to be fotind sooner or later.

"The solution provided by the Transport Act may not have been everyone's choice, but it must not be forgotten that no really workable alternative was forthcoming. And 1 constantly recall the irony of the fact that the Road Haulage Association inaugurated their Fighting Fund at a time when they feared nationalization at the hands of a Conservative Government!

"But whatever one's views were before 1947, it seems to me that it is plainly the duty of everyone to make the best of the solution that fate ... has decreed '