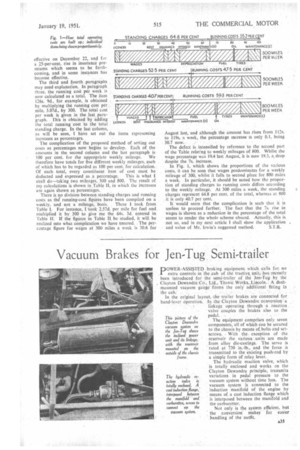 DOWER-ASSISTED braking equipment. which calls for, no extra controls in the cab of the tractive, unit has recently been introduced for the semi-trailer of the Jen-Tug by the Clayton Dewandre Co., Ltd.,. Titanic Works, Lincoln. A dashmounted vacuum gauge forms the only additional fitting in

the cab.' • In the original layout, the trailer brakes are connected for hand-lever operation. In the Clayton Dewandre ecnversion a linkage operating through a reaction valve couples the brakes also to the pedal.

The equipment comprises only seven components, all of which can be secured to the chassis by means ot bolts and setscrews. • With theexception of the reservoir the various units are made from alloy die-castings. The servo is rated at 730 in.-lb., and the force is transmitted to the existing push-rod by a simple form of relay lever.

The hydraulic reaction valve, which is totally enclosed and works on the Clayton Dewandre principle, transmits variations in pedal pressure to the vacuum system without time loss. The vacuum system is connected to the induction manifold of the engine by means of a cast induction flange which is interposed between the manifold and the carburetter.

Not only is the system efficient, but the conversion' makes for easier handling of the outfit.