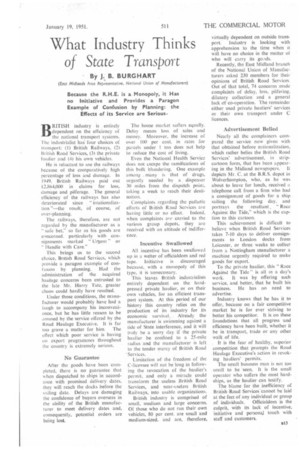 Page 47, 19th January 1951 — What Industry Thinks
Close
Noticed an error?
If you've noticed an error in this article please click here to report it so we can fix it.
Keywords : Haulage, Monopoly, Db Schenker Rail, Transport, Rail Transport, Salter Report

Because the R.H.E. is a Monopoly, it Has no Initiative and Provides a Paragon Example of Confusion by Planning: the Effects of its Service are Serious.

BRITISH industry is entirely dependent on the efficiency of the national transport systems. The industrialist has four choices of transport: (I) British Railways, (2) British Road Services, (3) the private haulier and (4) his own vehicles.

He is reluctant to use the railways because of the comparatively high percentage of loss and damage_ In 1949. British Railways paid out €2,864,000 in claims for loss, damage and pilferage. The general efficiency of the railways has also

deteriorated since " irrationalization "—the result, of course, of over-planning.

The railways, therefore, are not regarded by the manufacturer as a " safe bet," so far as his goods are concerned_ particularly with consignments marked " Urgent " or " Handle with Care."

This brings us to the second choice, Bntish Road Services, which provide a paragon example of confusion by planning.. . Had the administration of the acquired haulage concerns been entrusted to the late Mr. Harry Tate, greater chaos could hardly have resulted.

Under those conditions, the multifacturer would Probably have had a laugh to accompany his inconvenience, but he has little reason to be ,unused by the service offered by the Road Haulage Executive. It is far too grave a matter for him: The effect which poor service is having on export programmes throughout the country is extremely serious_ .

No Guarantee After the goods have been completed, there is no guarantee that when dispatched to ships in accordance with promised delivery dates, they will reach the docks before the sailing date. Delays are damaging the confidence of buyers overseas in the ability of the British manufacturer to meet delivery dates and, consequently, potential orders are being lost. The home market suffers equally. Delay means loss of sales and money. Moreover, the increase of over 100 per cent. in rates for parcels under 1 ton does not help to reduce the cost of living.

Even the National Health Service does not cscape the 'ramifications of this bulk blundering. One example among . many is that of drugs, urgently needed by a dispenser 30 miles from the dispatch point, taking a week to reach their destination.

Complaints regarding the pathetic efforts of British Road Services are having little or no effect. Indeed. when complaints are carried to the various group depots, they are received with an attitude of indifference.

All incentive has been swallowed up in a welter of officialdom and red tape. Initiative is discouraged because, with a monopoly of this type. it is unnecessary.

This leaves British industrialists entirely dependent on the hardpressed private haulier, or on their own vehicles, for an efficient transport system. At this period of our history this country relies on the production of its industry for its economic survival... Already the manufacturer is swimming against a tide of State interference, and it will truly be a sorry day if the private haulier be confined to a 25-mile ladius and the manufacturer is left to the tender mercy of British Road 'Services.

British industry is comprised of small, medium and large concerns. Of those who do not run their own vehicles, 80 per cent. are small and medium-sized, and are, therefore, virtually dependent on outside transport. Industry is looking with apprehension to the time when it will have no choice in the matter ot who will carry its go.xls.

Recently, the East Midland branch of the National Union of Manufacturers asked 230 members for their opinions of British Road Services Out of that total, 74 concerns made complaints of delay, loss, pilfering, dilatory collection and a general lack of co-operation. The remainder either used private hauliers' services or their own transport under C licences.

Advertisement Belied Nearly all the complainers compared the sei vice now given with that obtained before nationalization, which rather belies the British Road Services' advertisement, in stripcartoon form, that has been appear

ing in the Midland newspapers. It depicts Mr. C. at the B.R.S. depot in Wolverhampton, who, as he was about to leave for lunch, received a telephone call from a firm who had a consignment of goods for a ship sailing the following day, and portrays the resultant, "Race Against the Tide," which is the caption to this cartoon.

This achievement is difficult to believe when British Road Services takes 7-10 days to deliver consignments to London docks from Leicester, or three weeks to collect from a Nottingham manufacturer a machine urgently required to make goads for export.

To the private haulier, this "Race Against the Tide" is all in a day's work. It was by offering such service, and better, that he built his business. He has no need to advertise.

Industry knows that he has it to offer, because on a fair competitive market he is for ever striving to better his competitor. It is on these foundations that all progress 'and efficiency have been built, whether it be in transport, trade or any other

walk of life." • It is the fear of healthy, superior competition that prompts the Road Haulage Executive's action in revoking hauliers permits.

The small business man is not too small to be seen. It is the small operator who suffers the most hardships, as the haulier can testify.

The Mame for the inefficiency of British Road Services 'cannot be laid at the feet of any individual or group of individuals. Officialdom is the culprit, with its lack of incentive, initiative and persona.' touch with staff and customers.