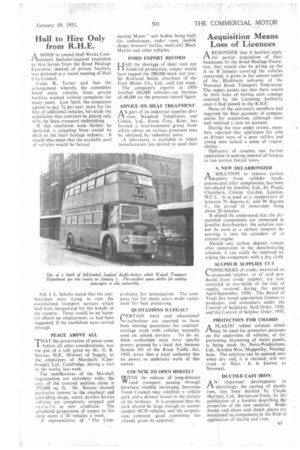 AREMINDER that if hauliers apply for partial acquisition of their businesses by the Road Haulage Executive, they would also be giving up the A or B licences covering the vehicles concerned, is given in the annual report of the Blackburn sub-area of the National Road Transport Federation. The report points out that there would be little hope of having such tonnage restored by the Licensing Authority once it had passed to the R.H.E.

None of the sub-area's members had reported the final payment of cornpensation for acquisition, although most had received a sum on account.

During the year under review, members reported that applicants for jobs as drivors were of a poor calibre and young men lacked a sense of responsibility.

A SOLUTION to remove carbon rildeposits from cylinder heads. pistons and other components, has been introduced by Jenolite, Ltd., 43, Piazza Chambers, Covent Garden, London, W.C.2. It is used at a temperature of between 70 degrees C. and 90 degrees C., the period of immersion being about 20 minutes.

It should be understood that the dismantled components arc immersed in Jenolite decarbonizer; the solution cannot be used as a carbon remover by pouring it into the cylinders of an erected engine.

Should any carbon deposit remain after immersion in the decarbonizing solution, it can easily be removed by wiping the component with a dry cloth.

A PLASTIC rubber solution which 4—kmay be used for protective purposes on the undersides of vehicles, or for preventing drumming of metal panels, is being made by Nova-Productions, Ltd., Gordon Rise, Mapperley, Nottingham. iThe solution can be painted over when dry and, it is claimed, will not crack or flake. It is known as Novaseal.

ANimportant development in metallurgy, the casting of ductile iron, has been marked by Lloyds (Burtdn), Ltd., Burton-on-Trent, by the publication of a booklet describing the properties of the new material. Brake drums and shoes and dutch .plates are mentioned as components in the field of application of ductile casi iron.