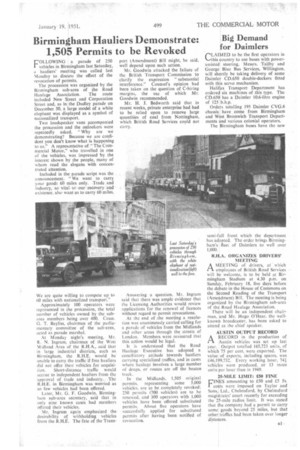 Page 35, 19th January 1951 — Birmingham Hauliers Demonstrate: 1,505 Permits to be Revoked
Close
Noticed an error?
If you've noticed an error in this article please click here to report it so we can fix it.
Keywords : Birmingham, Bedworth, Vehicle

E'OLLOWING a parade of 250 1 vehicles in Birmingham last Saturday, a hauliers' meeting was called last Monday to discuss the effect of the revocation of permits.

The procession was organized by the Birmingham sub-area of the Road Haulage Association. The route included New Street and Corporation Street and, as in the Dudley parade on Deceinber 30, a large model of a white elephant was displayed as a symbol of nationalized transport.

Two loudspeaker vans accompanied the procession and the onlookers were repeatedly asked, "Why are we demonstrating? Because we are confident you don't know what is happening to us." A representative of "The Commercial Motor," who travelled in one of the vehicles, was impressed by the interest shown by the people, many of whom read the slogans with concentrated attention.

Included in the parade script was the announcement. "We want to carry your goods 60 miles only. Trade and industry, so vital to our recovery and existence. also want us to carry 60 miles.

We are quite willing to compete up to 60 miles with nationalized transport."

Approximately 100 operators were represented in the procession, the total number of vehicles owned by the subarea members being over 400. Conn. G. T. Bayliss, chairman of the parliamentary committee of the sub-area, acted as parade marshal.

At Monday night's meeting, Mr. R. N. Ingram, chairman of the West Midland Area of the R.H.A., said that in large industrial districts, such as Birmingham, the R.H.E. would be unable to carry the traffic if free hauliers did not offer their vehicles for acquisition. Short-distance traffic would accrue to independent hauliers from the approval of trade and industry. The R.H.E. in Birmingham was worried as so few vehicles had been offered.

Mr. Ingram again emphasized the desirability of withholding vehicles from the R.H.E. The fate of the Trans port (Amendment) Bill might, he said, well depend upon such action.

Mr. Goodwin attacked the failure of thc British Transport Commission to clarify the expression "substantial interference." Counsel's opinion had been taken on the question of C-hiring margins, the use of which Mr. Goodwin recommended.

Mr. H. J. Bedworth said that in recent weeks, private enterprise had had to be relied upon to remove large quantities of coal from Nottingham, which British Road Services could not Ca rry.

Answering a question, Mr. Ingram said that there was ample evidence that the Licensing Authorities would review applications for the renewal of licences without regard to permit revocations.

At the end of the meeting a resolution was unanimously carried calling for a parade of vehicles from the Midlands and other areas through the streets of London. Members were reassured that this action would be legal.

It is understood that the Road Haulage Executive has adopted a conciliatory attitude towards hauliers carrying specialized traffics, and in cases where haulage involves a large number of drops, or routes are off the beaten track.