The Threat to Solid Fuel 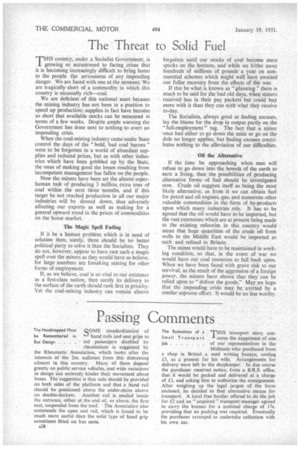 Page 30, 19th January 1951 — The Threat to Solid Fuel
Close
Noticed an error?
If you've noticed an error in this article please click here to report it so we can fix it.

THIS country, under a Socialist Government, is 1 growing so accustomed to facing crises that it is becoming increasingly difficult to bring home to the people the seriousness of any impending danger. We are faced with one at the moment. We are tragically short of a commodity in which this country is unusually rich—coal.

We are deficient of this national asset because the mining industry has not been in a position to speed up production; supplies in fact have become so short that available stocks can be measured in terms of a few weeks. Despite ample warning the Government has done next to nothing to avert an impending crisis.

When the coal-mining industry came under State control the days of the "bold, bad coal barons" were to be forgotten in a world of abundant supplies and reduced prices, but as with other industries which have been gobbled up by the State. the onus of making good the losses resulting from incompetent management has fallen on the people.

Now the miners have been set the almost superhuman task of producing 3 million_ extra• tons of coal within the next three months, and if this target be not reached production in all our major industries will be slowed down, thus adversely affecting our exports as well as making for a general upward trend in the prices of commodities on the home market.

The Magic Spell Fading If it be a human problem which is in need of solution then, surely, there should be no better political party to solve it than the Socialists. They do not, however, appear to have cast such a magic spell over the miners as they would have us believe, for large numbers are forsaking mining for other forms of employment.

If. as we believe, coal is so vital to our existence as a first-class nation, then surely its delivery to the surface of the earth should rank first in priority. Yet the coal-mining industry can remain almost forgotten until our stocks of coal beeome mere specks on the horizon, and while we fritter away hundreds of millions of pounds. a year on nonessential schemes which might well have awaited our fuller recovery from the effects of the war.

If this be what is known as " planning " there is much to be said for the bad old days. when miners received less in their pay packets but could buy more with it than they can with what they receive to-day.

The Socialists, always good at finding excuses, lay the blame for the drop in output partly on the " full-employment " tag. The fact that •a miner once had either to go down the mine or go on the dole no longer applies, but finding excuses contributes nothing to the alleviation of our difficulties.

, Oil the Alternative If the time be approaching when men will refuse to go down into the bowels of the earth to earn a living, then the possibilities of producing alternative forms of fuel should be investigated now. Crude oil suggests itself as being the most likely alternative, as from it we can obtain fuel for petrol and oil engines, gas, and numerous other valuable commodities in the form of by-products upon which many industries rely. It has to be agreed that the oil would have to be imported, but the vast extensions which are at present being made to the existing refineries in this country would mean that huge quantities of the crude oil from wells in the Middle East would be imported as such and refined in Britain.

The mines would have to be maintained in working condition, so that, in the event of war we would have our coal resources to fall back upon. When we have been faced with grave risk to our survival, as the result of the aggression of a foreign power, the miners have shown that they can be relied upon to "deliver the goods." May we hope that the impending -crisis may be averted by a similar supreme effort. It would be no less worthy.