Last Meeting of the C.M.U.A. 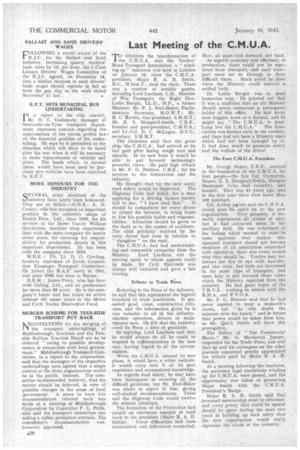 Page 22, 19th January 1945 — Last Meeting of the C.M.U.A.
Close
Noticed an error?
If you've noticed an error in this article please click here to report it so we can fix it.
Keywords :

celebrate the transformation of

The chairman said that the great ship, the C.M.U.A., had arrived at its last port after facing rough seas and smooth. In its new form it would' be able to put forward increasingly powerful views. He paid high tribute toMr. F. G. Bristow, C.B.E., for his services to the Association and the industry.

He thought. that by the new unity road safety would be improved. The Highway Code had failed, for a man applying for a driving licence merely hid to say, " I have read this." It should be compulsory for every driver to attend six lectures, to bring home to him his possible faults and responsibilities. Attention should be given to the facts as to the causes of accidents. The chief publicity received by the lorry driver had been in relation to " slaughter" on the road.

The C.M.U.A. had had understanding and reasonable sympathy from the Ministry. Lord Leathers was the moving spirit to whom appeals could be made. Sir Cyril Hurconds was always well balanced and gave a fair hearing.

Tribute to Trade Ptless Referring to the Press of the industry, he said that this represented the highest standard of trade journalism. It presented good, clean, constructive criticism, and the information given by it was valuable to all in the industry, whether operators, drivers or maintenance men. lie felt that the industry owed its Press a debt of gratitude.

In replying, Lord Leathers said that he would always do all he could to respond to representations in the best way, having regard to all the circumstances.

When the C.M.U.A. entered its new phase, it would have a wider outlook; it would carry into it all its past experience and accumulated knowledge. As regards road safety, he may have been inadequate in covering all the difficult problems, but Mr. Noel-Baker was about to report th him, giving well-studied recommendations. These and the Highway Code would receive the utmost attention.

The formation of the Federation had. caused an enormous amount of hard work to the president (Major R. A. B.

Smith). Great difficulties had been surmounted and differences reconciled. Now, all must look forward, not back.

As regards economy and efficiency of 'production, these could not be separated from transport, arra road transport must see us .through in these difficult times. Much could be done when the Ministry could contact a unified body. • .

Dr. Leslie 13urgin was . in most humorous 'vein. He pointed out that it was a tradition that an old Minister should never embarrass a subsequent holder of this office. He had never seen happier faces at a funeral, arid he might say "The C.M.U.A. is dead. Long live the C.M.U.A." The Association was formed early in the century, and there had net been a Ministry since which had not been besieged by it. It had done much to promote safety and the welfare of the driver, The Four C.M.U.A. Founders

Mr. George Monro, C.B.E., referred to thefoundation of the C.M.U.A. by four people—the late Col. Crompton. Messrs. E. S. Shrapnell-Smith, Douglas Mackenzie (who died recently), and himself. That was 41 years ago, and in the first year there were fewer than 100 members.

Col. Arthur Jarrett said the C.M U.A. would pass its spirit on to the new

organization. Very properly, 'it formerly represented all classes of user, but it had attracted more in the ancillary field. He was concerned at the feeling which seemed to exist in some quarters that traders who operated transport should not become members of an association concerned

• with operators; there was every reason why they should be. Traders may not always see eye to eye with hauliers, and vice versa, but both are interested in the same type of transport, and must help to put forward those views which the Ministry expected from the industry. He had great hopes of the T.R.T.A., working in unison with the R.H.A. and P.V.O.A.

Mr. F. G. Bristow said that he had never aspired to wear a monarch's crown, but " he who drafts the minutes rules the board," and in future that power would be taken from him, as Mr. Quick Smith will have this prerogative.

The Editor of "The Commercial Motor," Mr. G. Mackenzie junner, responded for the Trade Press, and said that he and his colleagues on the other journals concerned greatly appreciated the tribute paid by Major R. A. B.

At a meeting following the luncheon, the necessary legal resolutions winding up the C.M.U.A. were passed, and the opportunity was taken of presenting Major Smith with the C.M.U.A. President's Badge.

Major R. A. B.. Smith said that increased membership must be obtained, and every penny that could be spared should be spent during the next two years in building up such unity that the new organization would really represent the whole of the industry.