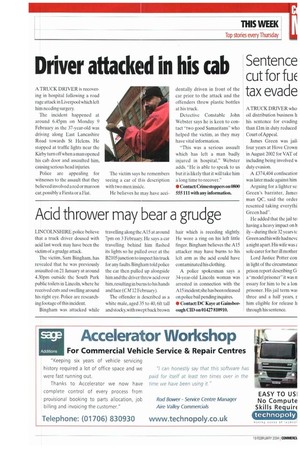 Page 13, 19th February 2004 — Sentence cut for fUE tax evade
Close
Noticed an error?
If you've noticed an error in this article please click here to report it so we can fix it.
Keywords : Duty, Economics, Value Added Tax, Law / Crime

A TRUCK DRIVER who oil distribution business h his sentence for evading than Um in duty reduced Court of Appeal.

James Green was jaili four years at Hove Crown in August 2002 for VAT of including being involved vy duty evasion.

A £374,404 confiscation was later made against him Arguing for a lighter se. Green's barrister, Jame man QC, said the order resented taking everythi Green had".

He added that the jail tel having a heavy impact on h ily — during their 32 years tc Green and his wife had neve a night apart. His wife was r sole carer for her ill mother Lord Justice Potter con in light of the circumstance prison report describing G. a -model prisoner" it was n essary for him to be a Ion prisoner. His jail term ww three and a half years, r him eligible for release h through his sentence.