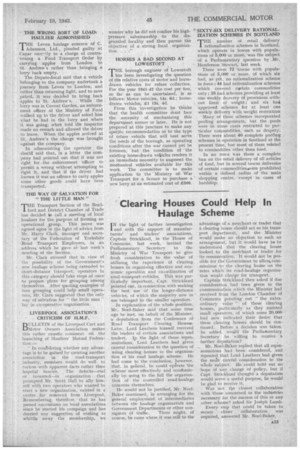 Page 17, 19th February 1943 — Clearing Houses Could Help In Haulage Scheme _
Close
Noticed an error?
If you've noticed an error in this article please click here to report it so we can fix it.
Keywords : Strickland, Surnames, Haulage, Leather

IN the light of further investigation and with the support of manufacturers' and traders' associations, Captain Strickland, in the 'House of Commons, last week, invited the Parliamentary Secretary to the Ministry of War Transport to give fresh consideration to the value of utilizing, the experience of clearing houses in organizing effective and economic operation and co-ordination of road-transport-vehicles. This was particularly important, Capt. Strickland pointed out, in connection with making the best use of the longer-distance vehicles, of which the majority now in use belonged to the smaller operators.

In explanation of the whole position, Mr. Noel-Baker said that some time ago he met, on behalf of the Minister, a deputation from the Conference of• Road Transport Clearing Houseet. Later, Lord Leathers himself received the leaders of certain associations and traders. Ip the light of those representations, Lord Leathers had given careful consideration to the question of using clearing houses in the organization of his road haulage scheme. He had come to the conclusion, however, that, in geheml, he could operate the scheme most effectively and economically by. using to the full the organization of the controlled road-haulage concerns themselves.

He would not be justified, Mr. NoelBaker continued, in arranging for the 'general employment of intermediaries between tlfe haulage organization and Government Departments or other con signors of traffic. There might, of course, be cases where it was still to the advantage of a merchant or trader that clearing house should act as his transport department, and the Minister would make no objection to such an arrangement, but it would have to be understood that the clearing house looked to the merchant or trader for its remuneration. It would not be possible for the Government to allow, commissions to the clearing house on the rates which its road-haulage organization would charge for transport.

Captain Strickland then asked if due consideration had been given to the communication which the Minister had received from the London Chamber of Commerce pointing out " the extraordinary value" of these clearing houses, particularly as they assisted small operators, of which some 20,000 had now indicated their desire that these clearing houses should be continued. Before a decision was taken, he added, would the Parliamentary Secretary be willing to receive a further deputation?

_ Mr. Noel-Biker replied that all representations had been considered, and repeated that Lord Leathers had given the mat careful consideration to the whole subject. He could hold out no hope of any change of policy, but if Capt. Strickland thought a deputation would serve a useful purpose, he would be glad to receive it.

Was not tl?e closest collaboration with those concerned in the industries necessary for the success of this or any other scheme? asked Sir Joseph Lamb.

Every step that could be taken to secure closer collaboration was required, answered Mr. Noel-Baker.