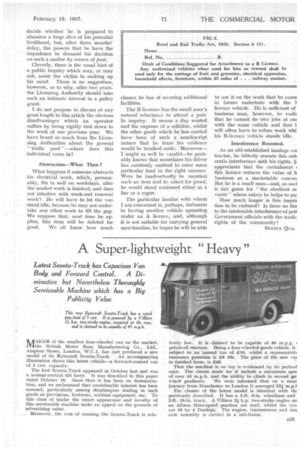 Page 41, 19th February 1937 — A Super-lightweight "Heavy
Close
Noticed an error?
If you've noticed an error in this article please click here to report it so we can fix it.

The first Scoota-Truck appeared in October last and was a normal-control tilt lorry. It was described in this paper dated October 16. Since then it has been on demonstration, and we understand that considerable interest has been aroused, particularly among shopkeepers dealing in such goods as provisions, footwear, wireless equipment, etc. To this class of trader the smart appearance and novelty of this serviceable machine make an appeal on the grounds of advertising value.

Moreover, The cost of running the Scoota-Truck is rela

tively low. It is claimed to be capable of 80 m.p.g. petrol-oil mixture. Being a four-wheeled goods vehicle, it subject to an 'annual tax of £10, whilst a representati) insurance premium is £6 10s. The price of the new vai in finished form, is £98.

That the machine is no thy is evidenced by its perford ance. The claims made for it include a maximum spee of over 45 m.p.h. and the ability to climb in second g&

1-in-6 gradients. We were informed that on a recer journey from Manchester to London it averaged 24 m.p.1 The chassis of the latest model is identical with tIK previously described. It has a 5-ft. 6-in, wheelbase and 2-ft. 10-in. track. A Villiers 24 h.p. two-stroke engine an an Albion three-speed gearbox are used, whilst the tyn are 16 by 4 Dtinlops. The engine, transmission and real axle assembly is carried in a sub-frame,