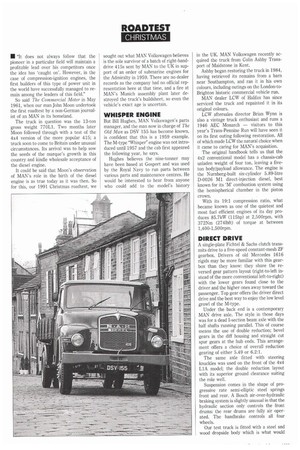 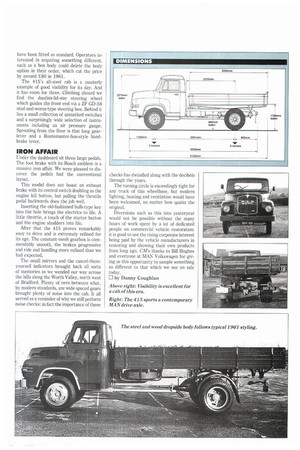 • "It does not always follow that the pioneer in a particular field will maintain a profitable lead over his competitors once the idea has 'caught on'. However, in the case of compression-ignition engines, the first builders of this type of power unit in the world have successfully managed to remain among the leaders of this field."

So said The Commercial Motor in May 1961, when our man John Moon undertook the first roadtest by a non-German journalist of an MAN in its homeland.

The truck in question was the 13-ton gross weight 770L1. Two months later Moon followed through with a test of the 4x4 version of the more popular 415; a truck soon to come to Britain under unusual circumstances. Its arrival was to help sow the seeds of the marques growth in this country and kindle wholesale acceptance of the diesel engine.

It could be said that Moon's observation of MAN's role in the birth of the diesel engine is as true today as it was then. So for this, our 1991 Christmas roadtest, we sought out what MAN Volkswagen believes is the sole survivor of a batch of right-handdrive 415s sent by MAN to the UK in support of an order of submarine engines for the Admiralty in 1959. There are no dealer records as the company had no official representation here at that time, and a fire at MAN's Munich assembly plant later destroyed the truck's buildsheet, so even the vehicle's exact age is uncertain.

But Bill Hughes, MAN Volkswagen's parts manager, and the man now in charge of The Old Man as DSV 155 has become known, is confident that this is a 1959 example. The M-type "Whisper" engine was not introduced until 1957 and the cab first appeared the following year, he says.

Hughes believes the nine-tonner may have been based at Gosport and was used by the Royal Navy to run parts between various parts and maintenance centres. He would be interested to hear from anyone who could add to the model's history in the UK. MAN Volkswagen recently acquired the truck from Colin Ashby Transport of Maidstone in Kent.

Ashby began restoring the truck in 1984, having retrieved its remains from a barn near Southampton, and ran it in his own colours, including outings on the London-toBrighton historic commercial vehicle run.

MAN dealer LCW of Halifax has since serviced the truck and repainted it in its original colours.

LCW aftersales director Brian Wynn is also a vintage truck enthusiast and runs a 1946 AEC Monarch — visitors to this year's Trans-Pennine Run will have seen it on its first outing following restoration. All of which made LCW the natural choice when it came to caring for MAN's acquisition.

The original handbook tells us that the 4x2 conventional model has a chassis-cab unladen weight of four ton, leaving a fiveton body/payload allowance. The engine is the Nurnberg-built six-cylinder 5.89-litre D-0026 M1 direct-injection diesel, best known for its 'M' combustion system using the hemispherical chamber in the piston crown.

A single-plate Fichtel & Sachs clutch transmits drive to a five-speed constant-mesh ZF gearbox. Drivers of old Mercedes 1616 rigids may be more familiar with this gearbox than they know: they share the reversed gear pattern layout (right-to-left instead of the more conventional left-to-right) with the lower gears found close to the driver and the higher ones away toward the passenger. Top gear offers the driver direct drive and the best way to enjoy the low level growl of the M-type.

Under the back end is a contemporary MAN drive axle. The style in those days was for a dead I-section beam axle with the half shafts running parallel. This of course means the use of double reduction; bevel gears in the diff housing and straight cut spur gears at the hub ends. This arrangement offers a choice of overall reduction gearing of either 5.49 or 6.2;1.

The same axle fitted with steering knuckles was used on the front of the 4x4 LlA model; the double reduction layout with its superior ground clearance suiting the role well.

Suspension comes in the shape of progressive rate semi-elliptic steel springs front and rear. A Bosch air-over-hydraulic braking system is slightly unusual in that the hydraulic section only controls the front drums: the rear drums are fully air operated. The handbrake controls all four wheels.

Our test truck is fitted with a steel and wood dropside body which is what would have been fitted as standard. Operators interested in acquiring something different, such as a box body could delete the body option in their order, which cut the price by around 80 in 1961.

The 415's all-steel cab is a masterly example of good visibility for its day. And it has room for three. Climbing aboard we find the dustbin-lid-size steering wheel which guides the front end via a ZF GD-58 stud-and-worm-type steering box. Behind it lies a small collection of unmarked switches and a surprisingly wide selection of instruments including an air pressure gauge. Sprouting from the floor is that long gearlever and a Routemaster-bus-style handbrake lever.

Under the dashboard sit three large pedals. The foot brake with its Bosch emblem is a massive iron affair. We were pleased to discover the pedals had the conventional layout.

This model does not boast an exhaust brake with its control switch doubling as the engine kill button, but pulling the throttle pedal backwards does the job well.

Inserting the old-fashioned bulb-type key into the hole brings the electrics to life. A little throttle, a touch of the starter button and the engine shudders into life.

After that the 415 proves remarkably easy to drive and is extremely refined for its age. The constant-mesh gearbox is commendably smooth, the brakes progressive and ride and handling more refined than we had expected.

The small mirrors and the cancel-themyourself indicators brought back all sorts of memories as we wended our way across the hills along the Worth Valley, north west of Bradford. Plenty of revs between what, by modern standards, are wide spaced gears brought plenty of noise into the cab. It all served as a reminder of why we still perform noise checks: in fact the importance of these checks has dwindled along with the decibels through the years.

The turning circle is exceedingly tight for any truck of this wheelbase, but modern lighting, heating and ventilation would have been welcomed, no matter how quaint the original.

Diversions such as this into yesteryear would not be possible without the many hours of work spent by a lot of dedicated people on commercial vehicle restoration: it is good to see the rising corporate interest being paid by the vehicle manufacturers in restoring and showing their own products from long ago. CM's thanks to Bill Hughes and everyone at MAN Volkswagen for giving us this opportunity to sample something so different to that which we see on sale today.