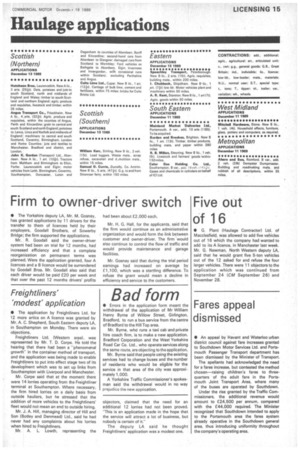 Page 17, 19th December 1969 — Fares appeal dismissed
Close
Noticed an error?
If you've noticed an error in this article please click here to report it so we can fix it.

• An appeal by Havant and Waterloo urban district council against fare increases granted to Southdown Motor Services Ltd. and Portsmouth Passenger Transport department has been dismissed by the Minister of Transport.

The apellants had acknowledged the need for a fares increase, but contested the method chosen—raising children's fares to threequarters of the adult fare in the Portsmouth Joint Transport Area, where many of the buses are operated by Southdown.

Under the rise granted by the Traffic Commissioners, the additional revenue would amount to £24.500 per annum, compared with the £44,000 required. The Minister recognized that Southdown intended to apply to the Portsmouth area the fares system already operative in the Southdown general area, thus introducing uniformity throughout the company's operating area.