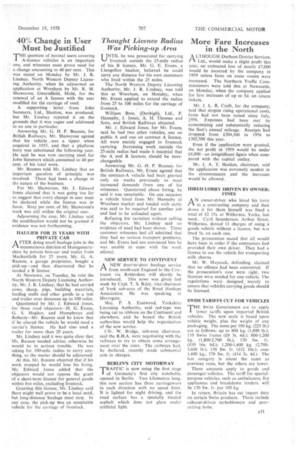 Page 33, 19th December 1958 — Thought LicenceRadius Was Picking-up Area
Close
Noticed an error?
If you've noticed an error in this article please click here to report it so we can fix it.
Keywords : Rail Transport, Wrexham, Road Haulage Association

UNTIL he was prosecuted for carrying livestock outside the 25-mile radius of his B licence, Mr. G. E. Evans, a Llangollen haulier, believed he could carry any distance for his own customers who lived within the 25 miles.

The North Western Deputy Licensing Authority, Mr. J. R. Lindsay, was told this at Wrexham, on Monday, when Mr. Evani applied to extend the radius from 2510 100 miles for the carriage of livestock.

Mr. J. Edward Jones, for Mr. Evans, said he had two other vehicles, one on public A and one on contract A licence. All were mainly engaged in livestock carrying. Increasing work outside the 25-mile radius had made it essential that the A and B. licences should be interchangeable.

Answering Mr. G. H. P. Beames, for 'British Railways, Mr._ Evans agreed that the contract-A vehicle had been granted only six weeks previously to meet increased demands from one of his witnesses. Questioned about hiring, he said it was unsuitable.. On one occasion a vehicle hired from Mr. Hanna by at Wrexham market and loaded with cattle was said to be required for another job and had to be unloaded again.

Refusing the variation without calling the objectors, Mr. Lindsay said no evidence of need had been shown. Three customer witnesses had all admitted that they had no serious transport problems, and Mr. Evans had not convinced him he was unable to cope with the 'work offered. ,

NEW SERVICE TO CONTINENT A NEW doortto=cloor haulage service from north-east England to the Continent via Rotterdam will shortly be introduced. This news was given last week by Capt. T. S. Riley, vice-chairman of York sub-area of the Road Haulage Association. He was speaking at Harrogate.

Maj. F. S. Eastwood, Yorkshire Licensing Authority, said red-tape was being cut to ribbons on the Continent and elsewhere, and he hoped the British authorities would help the organization of the new service.

('Hr. W. Bridge, sub-area chairman. said the R.H.A. were negotiating with the railways to try to obtain some arrangement over the rates. The railways had, he declared, recently made substantial cuts in charges.

BERLIN'S CITY MOTORWAY TRAFFIC is now using the first stage I of Germany's first city autobahn, opened in Berlin. Two kilometres long, this new section has three carriageways in each direction with no speed limit. It is lighted for night driving, and the road surface has a specially treated asphalt which does not glare under artificial light.