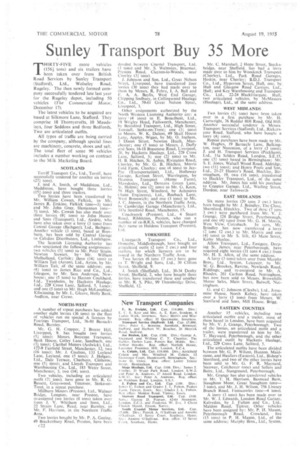 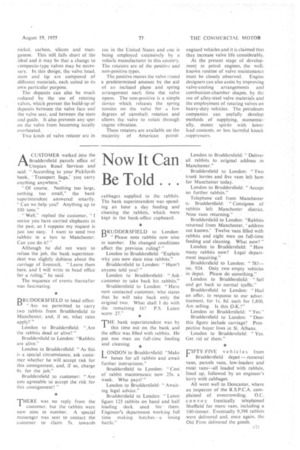 The latest vehicles to be acquired are based at Silkmore Lane, Stafford. They comprise 18 Thornycrofts, Id Maudslays, four Seddons and three Bedfords. Two are articulated outfits.

All types of traffic are being carried by the company, although special lines are machinery, concrete, shoes and salt. The total fleet of some 90 vehicles includes a number working on contract to the Milk Marketing Board.

J. and A. Smith, of Maddiston, Ltd., Maddiston, have bought three lorries (151 tons) and three trailers.

NORTH-WEST A number of repeat purchases has added another eight lorries (36 tons) to the fleet of vehicles run on special A licences by Fearings Transport, Ltd., 76-80 Barracks Road, Burnley.

Other assignments authorized by the

Lintzgarth Transport Co., Ltd., Ormesby, Middlesbrough, have bought an articulated outfit (2 tons 2 cwt.) and four trailers, for which licences are to he issued in the Northern Traffic Area.

Repeat purchases have been made by Mr. W. Hughes, 19 Barnacle Lane, Bulkington, near Nuneaton, of a lorry (3 tons); J. and H. Transport Services (Peckham), Ltd., Ha Selden Road, London, S.E.I5, one (71 tons) based in Birmingham; Mr.

The articulated outfits have been divided between Mr. G. P. Wilson, Hunton. Maidstone, and Hauliers (Eastern), Ltd., Bishop's Stortford, and two of the other lorries have been sold to Mr. G. F. R. Maynard, Stanway, Colchester (one) and Sellers and Batty, Ltd., Stanground, Peterborough.

nickel, carbon, silicon and manganese. This still falls short of the ideal and it may be that a change to composite-type valves may be necessarv. In, this design, the valve head, stem and tip are composed of different materials, each suited to its own particular purpose.

The deposits can also be much reduced by the use of rotating valves, which prevent the build-up of deposits between the valve face and the valve seat, and between the stem and guide. It-also prevents any spot on the valve from becoming locally

overheated. Two kinds of valve rotator are in use in the United States and one is being employed extensively by a vehicle manufacturer in this country. The rotators are of the positive and non-positive types.

The positive moves the valve round a predetermined amount by the aid of an inclined plane and spring arrangement each time the valve opens. The non-positive is a simple device which releases the spring tension on the valve for a few degrees of camshaft rotation and

These rotators are available on the majority of American petrol

engined vehicles and it is claimed that they increase valve life considerably.

At the present stage of development in petrol engines, the wellknown routine of valve maintenance

must be closely observed. Engine designers can also assist by improving valve-Cooling arrangements and combustion-chamber shapes, by the use of alloy-steel valve materials and the employment of rotating valves on heavy-duty vehicles. The petroleum companies can usefully develop methods of supplying, economic, ally, motor spirits with lOwer lead contents, or less harmful knock .suppressors.