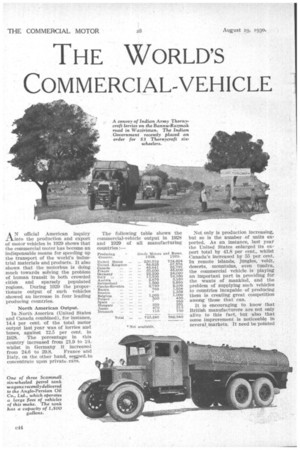 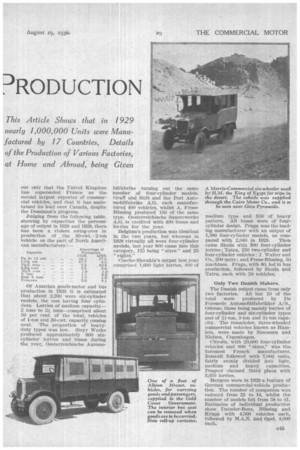 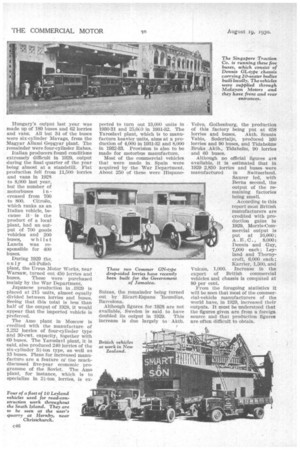 This Article Shows that in 1929 nearly 1,000,000 Units were Manufactured by 17 Countries, Details of the Production of Various Factories, at Horne and Abroad, being Given

A N official American inquiry 11...into the production and export of motor vehicles in 1929 shows that the commercial motor has become an indispensable means for speeding up the transport of the world's industrial materials and products. It also shows that the motorbus is doing much towards solving the problem of human transit in both crowded cities and sparsely populated regions. During 1929 the proportionate output of such vehicles showed an increase in four leading producing countries.

In ,North America (United States and Canada combined), for instance, 14.4 per cent. of the total motor output last year was of lorries and buses, against 12.5 per cent. in 1928. The percentage in this country increased from 21.9 to 24, whilst in Germany it increased from 24.6 to 29.8. France and Italy, on the other hand, seivied,to concentrate upon private, cars. The following table shows commercial-vehicle output in and 1929 of all manufacturing countries :— Not only is production increasing, but so is the number of units exported. As an instance, last year the United States enlarged its export total by 41.8 per cent., whilst Canada's increased by 55 per cent. In remote islands, jungles, veldt, deserts, mountains, even tundra, the commercial vehicle is playing an important part in providing for the wants of mankind, and the problem of supplying such vehicles to countries incapable of producing them is creating great competition among those that can.

It is encouraging to know that British manufacturers are not only alive to this fact, but also that some improvement is noticeable in several markets. It need be pointed Out only that the United Kingdom has superseded France as the second largest exporter of commercial vehicles, and that it has maintained its lead over Canada, despite the Dominion's progress.

Judging from the following table, showing by capacities the percentage of output in 1928 and 1929, there has been a violent swing-over in production of , the 30-cwt. 2-lon vehicle on the part of North American manufacturers

Of Austrian goods-motor and Nis production in 1929 it is estimated that about 2,200 were six-cylinder models, the rest having four cylinders. Lorries of medium capacity-2 tons to 2-1 tons--comprised about 50 per cent, of the total, vehicles of 1-ton and 30-cwt. capacity coming next. The proportion of heavyduty types was low. Steyr Werke produced approximately 900 sixcylinder lorries and buses during the year, Oesterreichische Antonio bilfabrike turning out the same number of four-cylinder models. Graff and Stift and the Pen i Automobilfabrike A.G. each manufactured 400 vehicles, whilst A. FrossBussing produced 150 of the same type. Oesterreichische Sauerewerke A.G. is credited with 400 buses and lorries for the year.

Belgium's production was identical in the two years, but whereas in 1928 virtually all were four-cylinder models, last year 800 came into this category, 175 being " sixes " and 25 "eights."

Czecho-Slovakia's output last year comprised 1,4300 light lorries, 400 of medium type and 350 of heavy pattern. All buses were of fourcylinder design. Praga was the leading manufacturer with an output of 1,500 four-cylinder models, as com pared with 2,040 in 1928. Then came Skala. with 300 four-cylinder lorries; Tatra, 250 two-cylinder and four-cylinder vehicles ; J. Walter and Co., 200 units ; and.Fross-Biissing, 50 machines. Praga, with 80, led in bus production, followed by Skoda and 'fatra, each with 50 vehicles., Only Two Danish Makers.

The Danish output came from only two factories. All but 10 of the total were produced by De Forenede Automobilfabrikker A/S., Odense, these being mainly lorries of four-cylinder and six-cylinder types and of 24-ton, 3-ton and 3i-ton eapa• city. The remainder, three-wheeled commercial vehicles known as Hamlets, were made by Simonsen and Nielsen, Copenhagen.

Mergers were in 1929 a feature of German commercial-vehicle production. The number of companies was reduced from 22 to 14, whilst the number of models fell from 58 to 41. Estimates of individual . production show. Daimler-Benz, Missing and Krupp with 4,500 vehicles each, followed by M.A.N. and Opel, 4,000 each.

Hungary's output last year was made up of 189 buses and 62 lorries and vans. All but 34 of the buses were six-cylinder Mavags, from the Magyar Allanii Gepgyar plant. The remainder were four-cylinder Rubes.

Italian producers found conditions extremely difficult in 1929, output during the final quarter of the year being almost at a standstill. Fiat production fell from 11,500 lorries and vans in 1928 to 8,000 last year, but the number of motorbuses i n creased from 700 to 800. Citroen, which ranks as an Italian vehicle, because it ° is the product of a local plant, had an output of 700 goods vehicles and 200 buses, whilst Lancia was responsible for 400 buses.

During 1929 the. only all-Polish plant, the Ursus Motor Works, near Warsaw, turned out 450 lorries and buses. These were purchased mainly by the War Department.

Japanese production in -1929 is placed at 215 units, almost equally divided between lorries and buses. Seeing that this total is less than half of the output of 1928, it would appear that the imported vehicle is preferred.

The Aino plant in Moscow is credited with the manufacture of 1,232 lorries of four-cylinder type and 30-cwt. capacity, together with 69 buses. The Yaroslavl plant, it is .said, also produced 240 lorries of the six-cylinder 3A-ton type, as well as 13 buses. Plans for increased manufacture are a feature co! the muchdiscussed five-year economic programme of the Soviet. The Amo plant, for instance, which is to specialize in 2i-ton lorries, is ex

Most of the commercial vehicles that were made in Spain were acquired by the 'War Department. About 250 of these were Hispano Suizas, the remainder being turned out by Ricart-Espana 'Iteundias, Barcelona.

Although figures for 1928 are not available, Sweden is said to have doubled its output in 1929. This increase is due largely to Aktb. Volvo, Gothenburg, the production of this factory being put at 658 lorries and buses. Aktb. Scania Vabis, Sodertalje, produced 160 lorries and 90 buses, and Tidaholms Bruks Aktb., Tidaholm, 90 lorries and 60 buses.

Although no official figures are available, it is estimated that in 1929 2,850 lorries and buses were manufactured in Switzerland. Saurer led, with Berna second, the output of the remaining factories being small.

According to this report most British manufacturers are credited with production gains in 1920. Morris-Commercial output is put at 16,000; A E C , 8,000; Dennis and Guy, 7,000 each ; Leyland and Thornycroft, 6,000 each; Karrier, 1,500, and Vulcan, 1,000. Increase in the export of British commercial vehicles and chassis is computed at 80 per cent. From the foregoing statistics it will be seen that most of the commercial-vehicle manufacturers of the world have, in 1929, increased their outputs. It must be understood that the figures given are from a foreign source and that production figures are often difficult to obtain.