No Tax on Overseas Sales Profit 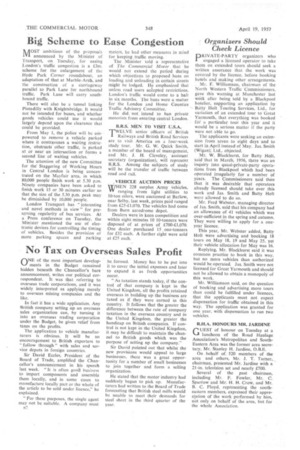 Page 36, 19th April 1957 — No Tax on Overseas Sales Profit
Close
Noticed an error?
If you've noticed an error in this article please click here to report it so we can fix it.
Keywords : Finance, Public Finance, Tax, Business / Finance

nNE of the most important develop1,1 ments in the Budget remained hidden beneath the Chancellor's bare announcement, writes our political correspondent. It was that referring to overseas trade corporations, and it was widely interpreted as applying merely to overseas mining companies and the like.

In fact it has a wide application. Any -British company setting up an overseas sales organization can, by turning it into an overseas trading corporation under the Budget, be given relief from taxes on the profits.

The application to vehicle manufacturers is obvious. It will be an encouragement to British exporters to "follow through" with sales and serVice depots in foreign countries.

Sir David Eccles, President of the Board of Trade, amplified the Chancellor's announcement in his speech last week. "It is often gooa business to import components and assemble them locally, and in some cases to manufacture locally part or the whole of the article to be sold under licence," he explained.

"For these purposes, the single agent may not be suitable, A company must H2 be formed. Money has to be put into it to cover the initial expenses and later to expand it as fresh opportunities occur.

Sir David pointed out that whilst the new provisions would appeal to large businesses, there was a great opportunity for a number of small businesses to join together and form a selling organization.

He stated that the motor industry had suddenly begun to pick up. Manufacturers had written to the Board of Trade forecasting that British steel mills would be unable to meet their demands for steel sheet in the third quarter of the year.