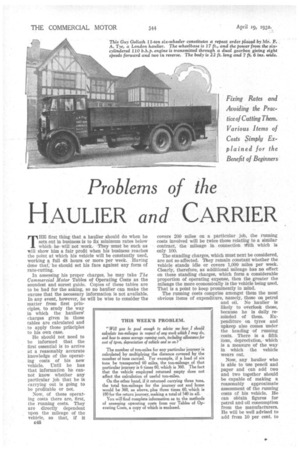 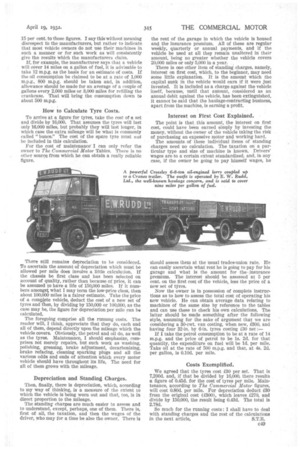 Page 70, 19th April 1932 — Problems of the
Close
Noticed an error?
If you've noticed an error in this article please click here to report it so we can fix it.

Fixing Rates and Avoiding the Practice of Cutting Them. Various Items of Costs Simply Explained for the Benefit of Beginners

THE first thing that a haulier should do when he sets out in business is to fix minimum rates below which he will not work. They must be such as will show him a fair profit when his business reaches the point at which his vehicle will be constantly used, working a full 48 hours or more per week. Having done that, he should set his face against any form of rate-cutting.

He should not need to be informed that the first essential is to arrive at a reasonably accurate knowledge of the operating costs of his new vehicle. Until he has that information he cannot know whether any particular job that he is carrying out is going to be profitable or not.

Now, of these operating costs there are, first, the running costs. They are directly dependent upon the mileage of the vehicle, so that, if it 048 covers 200 miles on a particular job, the running costs involved will be twice those relating to a similar contract, the mileage in connection 'with which is only 100.

The standing charges, which must next be considered, are not so affected. They remain constant whether the vehicle stands idle or covers 1,000 miles per week. Clearly, therefore, as additional mileage has no effect on these standing charges, which form a considerable proportion of operating expense, then the greater the mileage the more economically is the vehicle being used. That is a point to keep prominently in mind.

The running costs comprise amongst them the most obvious items of expenditure, namely, those on petrol and oil. No haulier is likely to overlook those, because he is daily reminded of them. Expenditure on tyres and upkeep also comes under the heading of running costs. There is a fifth item, depreciation, which is a measure of the way in which the vehicle wears out.

Now, any haulier who is able to use pencil and paper and can add two and two together should be capable of making a reasonably approximate assessment of the running costs of his vehicle. He can obtain figures for petrol and oil consumption from the manufacturers. He will be well advised to add from 10 per cent. to 15 per cent. to those figures. I say this without meaning disrespect to the manufacturers, but rather to indicate that most vehicle owners do not use their machines in such a manner or for such work as will consistently give the results which the manufacturers claim.

If, for example, the manufacturer says that a vehicle will cover 14 miles on a gallon of fuel, it is advisable to take 12 m.p.g. as the basis for an estimate of costs. If the oil consumption be claimed to be at a rate of 1,000 m.p.g., 800 m.p.g. should be taken and, in addition, allowance should be made for an average of a couple of gallons every 2,000 miles or 3,000 miles for refilling the crankcase. That will bring the consumption down to about 500 m.p.g.

How to Calculate Tyre Costs.

To arrive at a figure for tyres, take the cost of ft set and divide by 16,000. That assumes the tyres will last only 16,000 miles, but probably they will last longer, in which case the extra mileage will be what is commonly called " bunce." The cost of the spare tyre must not be included in this calculation.

For the cost of maintenance I can only refer the owner to The Commercial Motor Tables. There is no other source from which he can obtain a really reliable figure.

There still remains depreciation to be considered. To ascertain the amount of depreciation which must be allowed per mile does involve a little calculation. If the chassis be first class and has been selected on account of quality, rather than because of price, it can be assumed to have a life of 150,000 miles. If it numbers amongst what I may term the low-price class, then about 100,000 miles is a fairer estimate. Take the price of a complete vehicle, deduct the cost of a new set of tyres and then, by dividing by 150,000 or 100,000, as the case may be, the figure for depreciation per mile can be calculated.

The foregoing comprise an the running costs. The reader will, I think, appreciate that they do, each and all of them, depend directly upon the mileage which the vehicle covers. Obviously, the petrol and oil do, as well as the tyres. Maintenance, I should emphasize, comprises not merely repairs, but such work as washing, polishing, greasing, brake adjustment, decarbonizing, brake refacing, cleaning sparking plugs and all the various odds and ends of attention which every motor vehicle should have throughout its life. The need for all of them grows with the mileage.

Then, finally, there is depreciation, which, according to my way of thinking, is a measure of the extent to which the vehicle is being worn out and that, too, is in direct proportion to the mileage.

The standing charges are much easier to assess and to understand, except, perhaps, one of them. There is, first of all, the taxation, and then the wages of the driver, who may for a time be also the owner. There is the rent of the garage in which the vehicle is housed and the insurance premium. All of these are regular weekly, quarterly or annual payments, and if the vehicle be used at all they remain unaltered in their amount, being no greater whether the vehicle covers 20,000 miles or only 5,000 in a year.

There is one other item of standing charges, namely, interest on first cost, which, to the beginner, may need Some little explanation. It is the amount which the capital sunk in the vehicle would earn if it were just invested. It is included as a charge against the vehicle itself, because, until that amount, considered as an annual debit against the vehicle, has been extinguished, It cannot be said that the haulage-contracting business, apart from the machine, is earning a profit.

The point is that this amount, the interest on first cost, could have been earned simply by investing the money, without the owner of the vehicle taking the risk of purchasing an expensive motor and working hard.

The amounts of these individual items of standing charges need no calculation. The taxation on a particular type and size of machine is known. Drivers' wages are to a certain extent standardized, and, in any case, if the owner be going to pay himself wages, he should assess them at the usual trades-union rate. He can easily ascertain what rent he is going to pay for his garage and what is the amount for the , insurance premium. The interest should be assessed at 5 per cent, on the first cost of the vehicle, less the price of a new set of tyres.

Now the owner is in possession of complete instructions as to how to assess the total cost of operating his new vehicle. He can obtain average data relating to machines of the same size by reference to the tables and can use these to check his own calculations. The latter should be made something after the following style, assuming for the sake of argument that we are considering a 30-cwt. van costing, when new, 000, and having four 32-in. by 6-in. tyres costing £30 net :— If I take the petrol consumption to be at a rate of 14 m.p.g. and the price of petrol to be 1s. 2d. for that quantity, the expenditure on fuel will be 1d. per mile. Take oil at the rate of 500 m.p.g. and that, at 4s. 2d. per gallon, is 0.10d. per mile.

So much for the running costs : I shall have to deal with standing charges and the rest of the calculations in the next article. S.T.R.