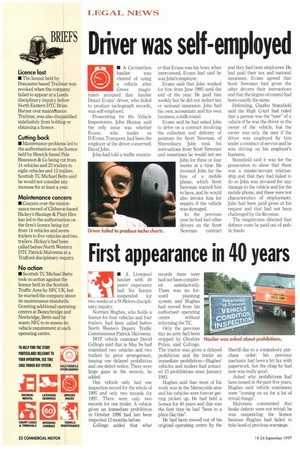 Page 24, 18th September 1997 — B's Driver was self-employed
Close
Noticed an error?
If you've noticed an error in this article please click here to report it so we can fix it.
Keywords : Tachograph, Mobile Phone, Insurance, Labor

• A Carmarthen haulier was cleared of using a vehicle after Crewe magistrates accepted that haulier Denzil Evans' driver, who failed to produce tachograph records, was self-employed.

Prosecuting for the Vehicle Inspectorate, John Heaton said the only issue was whether Evans, who trades as D Evans Transport, had been the employer of the driver concerned, David John.

John had told a traffic examin

er that Evans was his boss; whm interviewed, Evans had said he was John's employer.

Evans said that John worked for him from June 1995 until the end of the year. He paid him weekly but he did not deduct tax or national insurance. John had his own accountant and his own business, a milk round.

Evans said he had asked John to drive on a contract involving the collection and delivery of potatoes for Scott Newman, of Shrewsbury. John took his instructions from Scott Newman and sometimes he would not see John for three or four weeks at a time. He invoiced John for the hire of a mobile phone, which Scott Newman wanted him to have, and he would also invoice him for repairs if the vehicle was damaged.

In the previous year he had had other drivers on the Scott Newman contract and they had been employees. He had paid their tax and national insurance. Evans agreed that Scott Newman had given the other drivers their instructions and that the degree of control had been exactly the same.

Defending, Charles Stansfield said the High Court had ruled that a person was the "user" of a vehicle if he was the driver or the owner of the vehicle, but the owner was only the user if the driver was employed by him under a contract of service and he was driving on his employer's business.

Stansfield said it was for the prosecution to show that there was a master/servant relationship and that they had failed to do so John was invoiced for any damage to the vehicle and for the mobile phone, and these were not characteristics of employment. John had been paid gross at his request and that had not been challenged by the Revenue.

The magistrates directed that defence costs be paid out of public funds.