New Vehicle Would Get Wider Scope 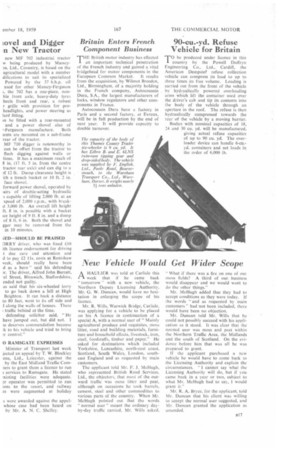 Page 51, 18th September 1959 — New Vehicle Would Get Wider Scope
Close
Noticed an error?
If you've noticed an error in this article please click here to report it so we can fix it.
Keywords : Moss, Business / Finance

/-1 A HAULIER was told at Carlisle this week that if he came back "tomorrow " with a new vehicle, the Northern Deputy Licensing Authority, Mr. G. W. Duncan, would have no hesitation in enlarging the scope of his licence.

Mr_ R. Wills. Warwick Bridge, Carlisle. was applying for a vehicle to be placed on his A licence in continuation of a special A, with a normal user of " Mainly agricultural produce and requisites, moss litter, road and building materials, furniture and household effects, livestock, iron, steel, foodstuffs, timber and paper." He asked for destinations which included Yorkshire, Lancashire, north-east coast, Scotland, South Wales, London, southeast England and as requested by main customers.

The applicant told Mr. F. J. McHugh, who represented British Road Services. Ltd., the objectors, that most of the outward traffic was moss litter and peat, although on occasions he took barrels, cement, steel and other commodities to various parts of the country. When Mr. McHugh pointed out that the words "normal user" meant the ordinary dayby-day traffic carried. Mr. Wills asked. What if there was a fire on one of our moss fields? A third of our. business would disappear and we would want to do the other things."

Mr. McHugh added that they had to accept conditions as they were today. If the words "and as requested by main customers" had not been included, there would have been no objection.

Mr. Duncan told Mr. Wills that he could not possibly succeed with his application as it stood. ft was clear that the normal user was moss and peat within the Northern Traffic Area, the Midlands and the south of Scotland. On the evidence before him that was all he was prepared to grant.

Mr. R. A. Bryce, for the applicant, told Mr. Duncan that his client was willing to accept the normal user suggested, and Mr. Duncan granted the application as amended.