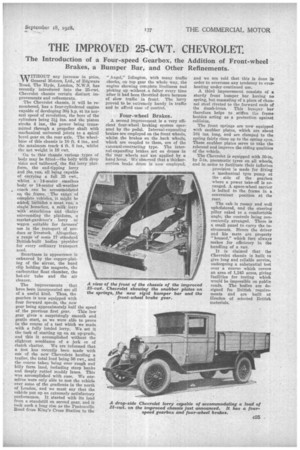 Page 9, 18th September 1928 — THE IMPROVED 25-CWT. CHEVROLET.
Close
Noticed an error?
If you've noticed an error in this article please click here to report it so we can fix it.

The Introduction of a Four-speed Gearbox, the Addition of Front-wheel Brakes, a Bumper Bar, and Other Refinements.

1-XTITTI0LIT any increase in price,

The Chevrolet chassis, it will be remembered, has a four-cylindered engine capable of developing 30-i h.p. at its normal speed of revolution, the bore of the cylinders being 3-1-i ins, and the piston stroke 4 ins., the power being transmitted through a propeller shaft with mechanical universal joints to a spiral bevel gear on the rear axle. The wheelbase of this chassis is 10 ft. 4 ins., and the maximum track 4 ft. 8 ins., whilst the net weight is 19 cwt.

On to• this chassis various types of body may be fitted—the body with drop sides and tailboard, the flat lorry platform, the end-tipping lorry and the van, all being capable of carrying a full 25 cwt., whilst a 14-:seater omnibus body or 14-seater all-weather coach can be accommodated on the frame. The range of complete vehicles, it might be added, includes a meat van, a single horsebox, a milk lorry with stanchions and chains surrounding the platform, a market-gardener's lorry or wagon suitable for farmers' use in the transport of produce or livestock. Altogether. a range of some 17 stiindard British-built bodies provides for every ordinary transport need.

Smartness in appearance is enhanced by the copper-plating of the airvac, the band clip holding the magneto, the carburetter float chamber, the hot-air tube and the air cleaner.

The improvements that have been incorporated are all of a useful kind. Thus, the gearbox is now equipped with four forward spetds, the new gear being approximately half the speed of the previous first gear. This low gear gives a surprisingly smooth and gentle start, as we were able to prove in the course of a test which we made with a fully loaded lorry. We set it the task of starting up on an up-grade, and this it accomplished without the slightest semblance of a jerk or of clutch chatter. We are informed that a test has recently been made with one of the new Chevrolets hauling a trailer, the total load being 50 cwt., and the course taken being over rough and hilly farm land, including steep banks and deeply rutted muddy lanes. This was accomplished with ease. We our selves were only able to test the vehicle over some of the gradients in the north of London, and we must say that the vehicle put up an extremely satisfactory performance. It started with its load from a standstill on second gear, and it took such a long rise as the Pentonville Road from King's Cross Station to the "Angel," Islington, with many traffic checks, on top gear the whole way, the engine showing complete liveliness and • picking up without a falter every time after it had been throttled down because of slow traffic in front. The lorry proved to be extremely handy in traffic and to afford ease of control.

A second improvement is a very efficient four-wheel , braking system operated by the pedal. Internal-expanding brakes are employed on the front wheels, whilst the brakes on the back wheels, which are coupled to them, are of the external-contracting type. The internal-expanding brakes act on drums in the rear wheels and are applied by a hand lever. We observed that a thickersection brake drum is now employed, and we are told that this is done in order to overcome any tendency to overheating under continued use.

A third improvement consists of a sturdy front bumper bar having no spring, but consisting of a piece of channel steel riveted to the forward ends of the dumb-irons. This bumper bar therefore helps to stiffen the frame besides acting as a protection against collision.

The front springs are now equipped with snubber plates, which are about 10,1 ins, long, and are clamped to the spring fairly close up to the spring eyes. These snubber plates serve to take the rebound and improve the riding qualities of the vehicle.

The Chevrolet is equipped with 30-in., by 5-in, pneumatic tyres on all wheels, and in order to facilitate their inflation provision is made for fitting a mechanical tyre pump at the side of the gearbox where a power take-off is arranged. A spare-wheel carrier is bolted to the frame in a, convenient position at the rear.

The cab is roomy and well upholstered, and the steering pillar raked to a comfortable angle, the controls being conveniently arranged. There is a small panel to carry the instruments. Hence the driver and his mate are properly "housed," which fact always makes for efficiency in the handling of a van.

It is claimed that the Chevrolet chassis is built to give long and reliable service, undergoing a substantial test over a course which covers an area of 1,245 acres, giving facilities for testing which would be impossible on public roads. The bodies are designed for British requirements and are built at Hendon of selected British materials.