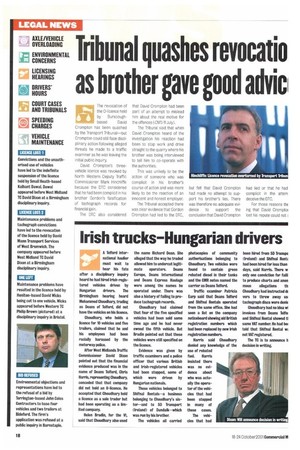 Page 18, 18th October 2001 — Irish trucks-Hungarian drivers
Close
Noticed an error?
If you've noticed an error in this article please click here to report it so we can fix it.
Keywords : Shifnal, Telford And Wrekin, Telford, Tachograph

A Telford international haulier must wait to hear his fate after a disciplinary inquiry heard he had hired Irish-registered vehicles driven by Hungarian drivers. The Birmingham hearing heard Mohammed Choudhary trading as Deans of Telford, did not have the vehicles on his licence.

Choudhary, who holds a licence for 10 vehicles and five trailers, claimed that he and his employees had been racially harassed by the motorway police.

Alter West Midlands Traffic Commissioner David Dixon pointed out that the financial evidence produced was in the name of Deans Telford, Chris Harris, representing Choudhary, conceded that that company did not hold an 0-licence. He accepted that Choudhary held a licence as a sole trader but had been operating as a limited company.

Helen Bradin, for the VI, said that Choudhary also used the name Richard Dean. She alleged that the way he traded allowed him to undercut legitimate operators. Deans Europe, Deans International and Deans Express Haulage were among the names he operated under. There was also a history of failing to produce tachograph records.

Choudhary had claimed that four of the five specified vehicles had been sold some time ago and he had never owned the fifth vehicle. But Bradin pointed out that these vehicles were still specified on the licence.

Evidence was given by traffic examiners and a police officer that various British and Irish-registered vehicles had been stopped, some of which were driven by Hungarian nationals.

These vehicles belonged to Shifnal Rentals—a business belonging to Choudhary's sister—and to SD Transport (Ireland) of Dundalk—which was run by his brother.

The vehicles all carried photocopies of community authorisations belonging to Choudhary. Two vehicles were found to contain green rebated diesel in their tanks and the CMR notes named the carrier as Deans Telford.

Harris said Choudhary denied any knowledge of the use of rebated fuel. Harris insisted there was no evidence about who was actually the operator of the vehicles that had been stopped in many of these cases.

The IC is to announce h decision in writing.