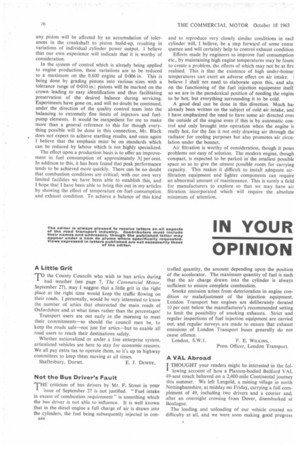 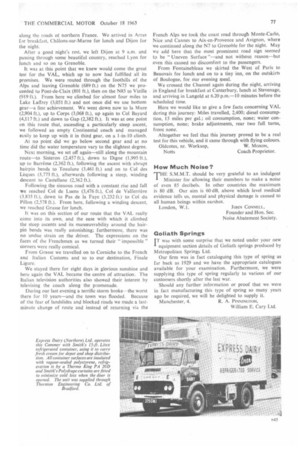 Page 78, 18th October 1963 — IN YOUR OPINION
Close
Noticed an error?
If you've noticed an error in this article please click here to report it so we can fix it.
Keywords : Hairpin Turn, Road Transport, Grenoble, Hospitality / Recreation

A Little Grit TOthe County Councils who wish to ban artics during bad weather (see page 7, The Commercial Motor, September 27), may I suggest that a little grit in the right place at the right time would keep the traffic flowing on their roads. I personally, would be very interested to know the number of artics that obstructed the main roads of Oxfordshire and at what times ratherthan the percentages! Transport users are out early in the morning to meet their commitments—so should the council men be, to keep the roads safe—not just for artics—but to enable all road users to reach their destinations safely.

Whether nationalized or under a free enterprise system, articulated vehicles are here to stay for economic reasons. We all pay extra tax to operate them, so it's up to highway committees to keep them moving at all times.

Not the Bus Driver's Fault

THE criticism of bus drivers by Mr. F. Street in your I issue of September 27 is not justified. "Fuel intake in excess of combustion requirement" is something which the bus driver is not able to influence. It is well known that in the diesel engine a full charge of air is drawn into the cylinders, the fuel being subsequently injected in con 544 trolled quantity, the amount depending upon the position of the accelerator. The maximum quantity of fuel is such that the air charge drawn into the cylinder is always sufficient to ensure complete combustion.

Smoke emission arises from deterioration in engine condition or maladjustment of the injection equipment. London Transport bus engines are deliberately derated 10 per cent below the manufacturer's recommended setting to limit the possibility of smoking exhausts. Strict and regular inspections of fuel injection equipment are carried out, and regular surveys are made to ensure that exhaust emissions of London Transport buses generally do not cause offence.

A VAL Abroad I THOUGHT your readers might be interested in the folI lowing account of how a Plaxton-bodied Bedford VAL 49-seat coach behaved on a 2,400-mile Continental journey this summer. We left Langold, a mining village in north Nottinghamshire, at midday on Friday, carrying a full complement of 49, including two drivers and a courier and, after an overnight crossing from Dover, disembarked at Boulogne.

The loading and unloading of our vehicle created no difficulty at all, and we were soon making good progress along the roads of northern France. We arrived in Arras for breakfast, Chalons-sur-Marne for lunch and Dijon for the night.

After a good night's rest, we left Dijon at 9 a.m. and passing through some beautiful country, reached Lyon for lunch and so on to Grenoble.

At no point did we go below second gear and at no time did the water temperature vary to the slightest degree.

It was on this section of our route that the VAL really came into its own, and the ease with which it climbed the steep ascents and its manceuvrability around the hairpin bends was really astonishing; furthermore, there was no undue strain on the driver. The expressions on the faces of the Frenchmen as we turned their " impossible" corners were really comical.

From Grasse we travelled on to Corniche to the French and Italian Customs and so to our dektination, Finale Ligure.

We stayed there for eight days in glorious sunshine and here again the VAL became the centre of attraction. The Italian television authorities also showed their interest by televising the coach along the promenade.

During our last evening a terrific storm broke—the worst there for 10 years—and the town was flooded. Because of the fear of landslides and blocked roads we made a lastminute change of route and instead of returning via the French Alps we took the coast road through Monte-Carlo, Nice and Cannes to Aix-en-Provence and Avignon, where we continued along the N7 to Grenoble for the night. May we add here that the most prominent road sign seemed to be "Uneven Surface "—and not without reason—but even this caused no discomfort to the passengers.

From Fontainebleau we skirted the West of Paris to Beauvais for lunch and on to a tiny inn, on the outskirts of Boulogne, for our evening meal.

We crossed the Channel again during the night, arriving in England for breakfast at Canterbury, lunch at Stevenage, and arriving in Langold at 6.20 p.m.-10 minutes before the scheduled time.

Here we would like to give a few facts concerning VAL during this journey: Miles travelled, 2,400; diesel consump tion, 15 miles per gal.; oil consumption, none; water consumption, none; brake adjustments, rear two full turns, front none.

Altogether we feel that this journey proved to be a real test for this vehicle, and it came through with flying colours.

THE S.M.M.T. should be very grateful to an indulgent Minister for allowing their members to make a noise of even 85 decibels. In other countries the maximum is 80 dB. Our aim is 60 dB, above which level medical evidence tells us, mental and physical damage is caused to all human beings within earshot.

IT was with some surprise that we noted under your new I equipment section details of Goliath springs produced by Metropolitan Springs Ltd.

Should any further information or proof that we were in fact manufacturing this type of spring so many years ago be required, we will be delighted to supply it.