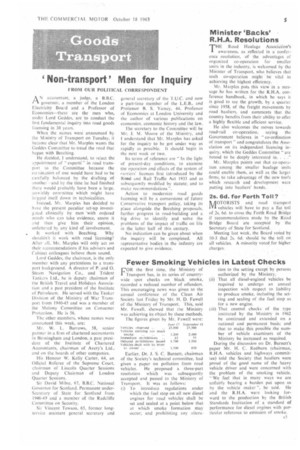 Page 7, 18th October 1963 — ' Non-transport ' Men for Inquiry
Close
Noticed an error?
If you've noticed an error in this article please click here to report it so we can fix it.
Keywords : Marples, Basil Yamey

N accountant, a judge, a B.B.C. £1 governor, a member of the London Electricity Board and a Professor of Economics—these are the men who, under Lord Geddes, are-to conduct the first fundamental inquiry into road goods licensing in 30 years. _ When the names were announced by the Ministry of Transport on Tuesday, it became clear that Mr. Marples wants the (ieddes Committee to tread the road that began with Beeching. He decided, I understand, to reject the appointment of " experts'" in road transport to the Committee because the nominatioo of one would have had to be carefully balanced by the drafting of-: another-by the time he had finished there would probably have been a large, unw:eldy committee which might have begged itself down in technicalities. Instead, Mr. Marples has decided to have the present peculiar set-up investilotted clinically by men 'with ordered minds who can take evidence, assess it and then give him their opinion, unfettered by any kind of involvement. It worked with Beeching. Why shouldn't it work with road licensing? After all, Mr. Marples will only act on their recommendations if his advisers and Cabinet colleagues believe them sound. Lord Geddes, the chairman, is the only member with any pretentions to a transport background. A director of P. and a Stearn Navigation Co., and Trident Tankers Ltd., he is deputy chairman of the British Travel and Holidays Association and a past president of the Institute of Petroleum. He served with the Tanker Division of the Ministry of War Transport from 1940-45 and was a member of the Motony Committee on Consumer Protection. He is 56.

The other members, whose names were announced this week, are

Mr. W. L. Barrows, 58, senior partner in a firm of chartered accountants in Birmingham and London, a past president of the institute of Chartered Accountants, chairman of Avery's Ltd.. andon the boards of other companies.

His Honour W. Kelly Carter, 64, an Official Referee of the Supreme Court, chairman of Lincoln Quarter Sessions end Deputy Chairman of London Quarter Sessions, Sir David Milne, 67, H.B.C. National Governor for Scotland. Permanent underSecretary of State for Scotland from 1946-49 and a member of the Radcliffe Committee on Security.

Sir Vincent Tevvson, 65, former longservice assistant general secretary and general secretary of the T.U.C. and now a part-time member of the L.E.B., and Professor B. S. Yamey, 44, Professor of Economics at London University and the author of various publications on economics, economic history and the law. The secretary to the Committee will be Mr. J. M. Moore of the Ministry, and I understand that Mr. Marples has asked for the inquiry to be got under way as rapidly as possible. It should begin in the next week or two. Its terms of reference are " In.the light of present-day conditions, to examine the operation and effects of the system of carriers' licences first introduced by the Rd and Rail Traffic Act 1933 and as subsequently modified by statute; and to make recommendations".

Action to modernize road goods licensing will be a cornerstone of future Conservative transport policy, taking its place alongside the Beeehing proposals, further progress in road-building and a big drive to identify and solve the problems of the impact of traffic on life in the latter half of this century.

No indication can be given about when

the inquiry. will be completed. All representative bodies in the industry are expected to give evidence.