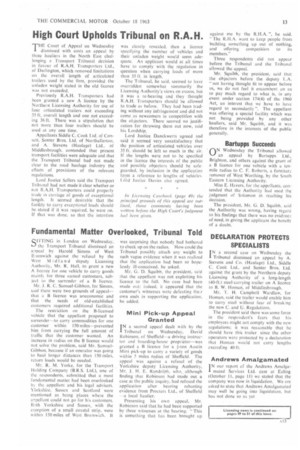 SITTING in London on Wednesday, the Transport Tribunal dismissed an amical by Harold Simms of West Bromwich against the • refusal by the West M idland deputy Licensing Authority, Mr. R. Hall, to grant a new A licence for one vehicle to carry goods mainl■ for three named customers, subject to the surrender or a B licence. Mr. J. R. C. Samuel-Gibbon, for Simms, said there were two grounds of appeal— that a B licence was uneconomic and that the needs of old-established customers required additional facilities. The restriction on the B-licensed vehicle that the appellant proposed to surrender—to carry commodities for one customer within 150 miles—prevented him from carrying the full amount of traffic that the customer wanted. An increase in radius on the B licence would not solve the problem, said Mr. SamuelGibbon, because if an operator was going to haul longer distances than 150 miles. return loads would be needed.

Mr. R. M. Yorke. for the Transport Holding Company (B.R.S. Ltd.), one of the respondents. submitted that a most fundamental matter had been overlooked by the appellant and his legal advisers. Yorkshire. Sussex and Scotland were mentioned as being places where the arpellant could flot, go for his customers. Both Yorkshire and Sussex, with the exception of a small coastal strip, were within 150 miles of West Bromwich. It

was surprising that nobody had bothered to check up on the radius. How could the Tribunal possibly attach any weight to such vague evidence when it was realized that the application had been so hopelessly ill-conceived, he asked. Mr. G. D. Squibb. the president, said that the appellant was not exploiting his licence to the full. No case had been made out: indeed, it appeared that the customer's witnesses were defeating the:r own ends in supporting the application. he added.

Mini Pick-up Appeal Granted I N a second appeal dealt with by the Tribunal on Wednesday, David Robinson, of Sheffield—a driving instructor and boarding-house proprietor—was granted a B licence for a 1-ton Austin Mini pick-up to carry a variety of goods within 5 miles radius of Sheffield. The appeal was against a refusal of the Yorkshire deputy Licensing Authority, Mr. J. H. E. Randolph. who,. although finding that Robinson had made out a case at the public inquiry, had refused the application after hearing rebutting evidence from Procters Ltd., of Sheffield --a local haulier.

Presenting his own appeal. Mr. Robinson said that he had been supported by three witnesses at the hearing. "This is something that has been brought up against me by the R.H.A.", he said. "The R.H.A. want to keep people from building something up out of nothing, and offering competition to its members."

Mr. Squibb, the president, said that the objectors before the deputy LA. not having thought fit to appear before us, we do not feel it encumbent on us to pay much regard to what is, in any event under section 174(4) of the 1960 Act, an interest that we have to have regard to secondarily ". The appellant was offering a special facility which was not being provided by any other hauliers, said Mr. Squibb, and it was therefore in the interests of the public generally.

Bartupps Succeeds N Wednesday the Tribunal allowed an appeal by Bartupps Ltd., Brighton, and others against the grant of a B licence for one vehicle with a tenmile radius to C. F. Roberts, a furniture remover of West Worthing, by the South Eastern Licensing Authority.

Miss E. Havers, for the appellants. contended that the Authority had used thc judgment of Solomon in reaching his decision.

The president, Mr. G. D. Squibb, said the Authority was wrong, having regard to his findings that there was no evidence of need, in giving the applicant the benefit of a doubt.