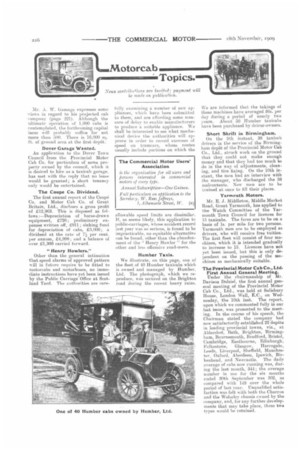 Page 14, 18th November 1909 — Motorcab Topics.
Close
Noticed an error?
If you've noticed an error in this article please click here to report it so we can fix it.
Keywords : Taxicab, Manganese Bronze Holdings

News contributions are ineffrri: payment will be made on pubhce Hen.

Mr. A. W. Gamage expresses some .views iu regard to his projected cab

• company (page 221). Although the ultimate operation of 1,000 cabs is contemplated, tire forthcoming capital issue will probably suffice for not more than 500. There is 16,000 sq. St. of ground area at the first depot.

An application to the Dover Town Council from the Provincial Motor Cab Co. for particulars of some property owned by the council, which it is desired to hire as a taxicab garage, has met with the reply that no lease would be granted; a short tenancy only would he entertained.

Other than the general intimation that speed alarms of approved pattern will in future require to be fitted to motorcabs and motorbuses, no immediate instructions have yet been issued by the Public Carriage Office at Scotland Yard. The authorities are care

fully examining a number of new appliances, which have been submitted to them, and are affording some measure of delay to enable manufacturers to produce a suitable appliance. We shall be interested to see what mechanical device the authorities will approve in order to record excesses of speed on tramcars, whose routes usually include portions on which the allowable speed limits are dissimilar. If, as seems likely, this application to public-carriages, whose accident record last year was so serious, is found to be impracticable, no equitable alternative can be found, other than the abandonment of the " Henry Howler " for the other and less offensive road-users.

We illustrate, on this page, one of the fleet of 40 Humber taxicabs which is owned and managed by Humber, Ltd. The photograph, which we reproduce, was secured on the Brighton road during the recent heavy rains. %Ye are informed that the takings of these machines have averaged 30s. per day during a period of nearly two years. About 50 Humber taxicabs have been purchased by driver-owners.

On the 9th instant, 38 taxicab drivers in the service of the Birmingham depot of the Provincial Motor Cab Co., Ltd., struck work on the ground that they could not make enough money and that they had too much to do in the way of adjustments, cleaning, and tire fixing. On the 10th instant, the men had an interview with the manager, who discharged the 38 malcontents. New men are to be trained at once to fill their places.

Mr. E. J. Middleton, Middle Market Road, Great Yarmouth, has applied to the Watch Committee of the Yarmouth Town Council for licences for 15 taxicabs. The fares are to be on a basis of Is. per mile for two persons. Yarmouth men are to be employed as drivers, who will receive free tuition. The first fleet will consist of four machines, which it is intended gradually to increase to 15. Licences have not yet been issued, but this is only dependent on the passing of the machines as mechanically suitable,

First Annual General Meeting._ Under the chairmanship of Mi. Davison Dalziel, the first annual general meeting of the Provincial Motor Cab Co., Ltd., was held at Salisbury House, London Wall, RC., on Wednesday, the 10th inst. The report, upon which we commented fully in our last issue, was presented to the meeting. In the course of his speech, the Chairman stated the company had now satisfactorily established 22 depots in leading provincial towns, viz., at Aldershot, Bath, Brighton, Birmingham, Bournemouth, Bradford, Bristol, Cambridge, Eastbourne, Edinburgh, Folkestone, Glasgow, Harrogate, Leeds, Liverpool, Sheffield, Manchester, Oxford, Aberdeen, Ipswich, Birkenhead, and Newcastle. The daily average of cabs now running was, during the last month, 344 the average number in use for the six months ended 30th September was 302, as compared with 148 over the whole period of last year. Unqualified satisfaction was felt with bath the Charron and the Wolseley chassis ewnecl by the company, and, for any further developments that may take place, these twa types would be retained.