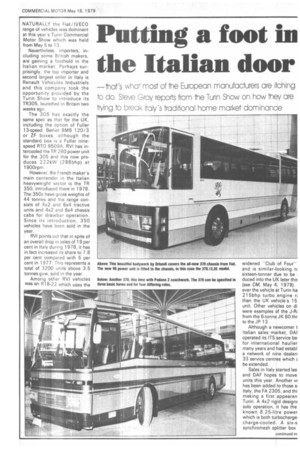 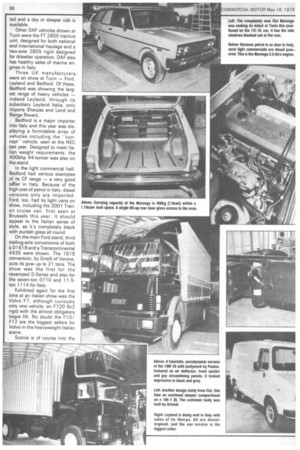 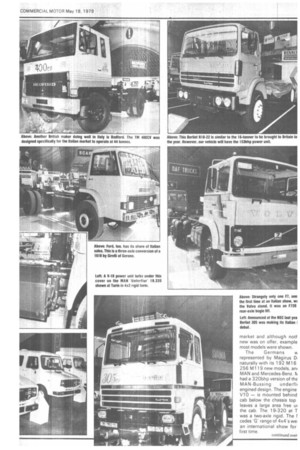 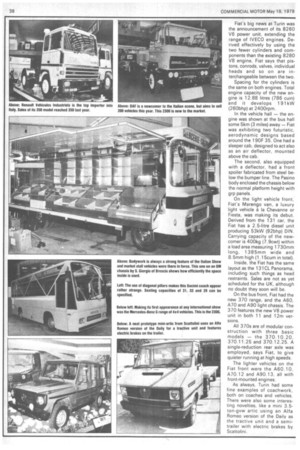 Page 37, 18th May 1979 — Putting a foot hi the Italian door
Close
Noticed an error?
If you've noticed an error in this article please click here to report it so we can fix it.
Keywords : Fiat, Iveco, Truck, Sedans, Station Wagons, Fiat Automobiles, Astra Spa

at's what most of e European manufacturers are itching to do. Steve Gray reports from the Turin Show on how they are -Tying to break Italy's traditional home market dominance

NATURALLY the Fiat / IVECO range of vehicles was dominant at this year's Turin Commercial Motor Show which was held from May 5 to 13.

Nevertheless, importers, including some British makers, are gaining a foothold in the Italian market. Perhaps surprisingly, the top importer and second largest seller in Italy is Renault Vehicules lndustriels and this company took the opportunity provided by the Turin Show to introduce its TR305, launched in Britain two weeks ago.

The 305 has exactly the same spec as that for the UK, including the option of Fuller 13-speed„ Berliet BM8 120/3 or ZF boxes, although the standard box is a Fuller nine

However, the French maker's main contender in the Italian heavyweight sector is the TR 350, introduced there in 1978.

The 350s have gross weights of 44 tonnes and the range consists of 4x2 and 6x4 tractive units and 4x2 and 6x4 chassis cabs for drawbar operation. Since its introduction, 350 vehicles have been sold in the year.

Below: Another 370. this time with Padane 2 coachwork. The 370 can be specified in duced into the UK later thi5.

ever the vehicle at Turin ha 215bhp turbo engine ri than the UK vehicle's 15 unit. Other vehicles on di were examples of the J-Ri from the 6-tonne JK 60 thr to the JP 13.

Although a newcomer t Italian sales market, DAf operated its ITS service ba for international haulier many years and had establ a network of nine dealerE 33 service centres which g be extended.

and DAF hopes to move units this year. Another v( has been added to those si Italy, the FA 2305, and thi making a first appearan Turin. A 4x2 rigid design( solo operation, it has the known 8.25-litre power which is both turbochargei charge-cooled. A six-s synchromesh splitter box ted and a day or sleeper cab is available.

Other DAF vehicles shown at Turin were the FT 2805 tractive unit, designed for both national and international haulage and a two-axle 2805 rigid designed for drawbar operation. DAF also has healthy sales of marine engines in Italy.

were on show at Turin — Ford, Leyland and Bedford. Of these, Bedford was showing the larg est range of heavy vehicles — indeed Leyland, through its subsidiary Leyland Italia, only imports Sherpas and Land and Range Rovers.

Bedford is a major importer into Italy and this year was displaying a formidable array of vehicles including the "concept" vehicle, seen at the NEC last year. Designed to meet Italian weight requirements, the 400bhp 44-tonner was also on the stand.

In the light commercial hall, Bedford had various examples of its CF range — a very good sdller in Italy. Because of the high cost of petrol in Italy, diesel versions only are imported. Ford, too, had its light vans on show, including the 3001 Transit cruise van, first seen at Brussels this year. It should appeal to the Italian sense of style, as its completely black with purdah glass all round.

On the main Ford stand, third trailing-axle conversions of both a D1618 and a Transcontinental 4435 were shown. The 1618 conversion, by Girelli of Verona, puts its gvw up to 21 tons. The show was the first for the revamped D-Series and also for the seven-ton 0710 and 11.5ton 1114 for Italy.

Exhibited again for the first time at an Italian show was the Volvo F7, although curiously only one vehicle, an F720 6x2 rigid with the almost obligatory bogie lift. No doubt the F107 Fl 2 are the biggest sellers for Volvo in the heavyweight Italian scene.

Scania is of course into the

market and although notlnew was on offer, example most models were shown.

The Germans represented by Magirus naturally with its 192 M16 256 M119 new models, an MAN and Mercedes-Benz I\ had a 320bhp version of thE MAN-Bussing underfli engined design. The engine V10 — is mounted behind cab below the chassis top leaves a large area free in the cab. The 19-320 at T was a two-axle rigid. The r cedes "G" range of 4x4's we an international show for first time Fiat's big news at Turin was the announcement of its 8260 V6 power unit, extending the range of IVECO engines. Derived effectively by using the two fewer cylinders and components than the existing 8280 V8 engine, Fiat says that pistons, conrods, valves, individual heads and so on are interchangeable between the two.

In the vehicle hall — the engine was shown at the bus hall some 5km (3 miles) away — Fiat was exhibiting two futuristic, aerodynamic designs based around the 190F 35. One had a sleeper cab, designed to act also as an air deflector, mounted above the cab.

The second, also equipped with a deflector, had a front spoiler fabricated from steel below the bumper line. The Pasino body enclosed the chassis below the normal platform height with grp panels.

Inside, the Fiat has the same layout as the 131CL Panorama, including such things as head restraints. Sales are not as yet scheduled for the UK, although no doubt they soon will be.

As always, Turin had some fine examples of coachwork, both on coaches and vehicles. There were also some interesting novelties, like a mini 3.5ton-gvw artic using an Alfa Romeo version of the Daily as the tractive unit and a semitrailer with electric brakes by Scattolini.