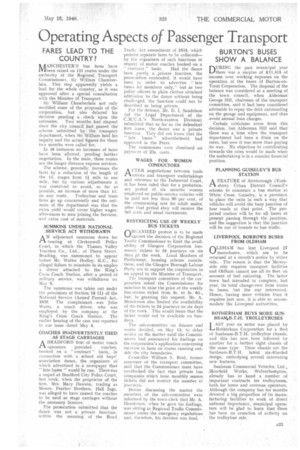 Page 25, 18th May 1940 — Operating Aspects of Passenger Transport
Close
Noticed an error?
If you've noticed an error in this article please click here to report it so we can fix it.
Keywords : Bus, Trolleybus, Action, Rīgas Satiksme, Nottingham Corporation Tramways

FARES LEAD TO THE COUNTRY?

AANCHESTER'S bus fares have IVIbeen raised on 121 routes under the authority of the Regional Transport Commissioner, Sir William Chamberlain. This step apparently yields a lead for the whole country, as it was approved after a special consultation with the Minister of Transport.

Sir William Chamberlain not only modified some of the proposals of the corporation, but also delayed his decision pending a check upon the estimates. Two months had _elapsed since the city council had passed the' scheme submitted by the transport department, when Sir William held his inquiry and the actual figures for those two months were called for.

In 16 instances no increases of fares have been allowed, pending further negotiation. In the main, these routes are the longer distance express services.

The scheme, generally, increases the fares by a reduction of the length of the Id. stages from I+ mile to one mile, but by various adjustments it was contrived to avoid, so far as possible, an increase of more than ld. on any route. Trolleybus and tram fares go up concurrently and the estimate of the department was that the extra yield would cover higher wages, allowances to men joining the Services, and extra cost of materials.

AN adjourned summons down for hearing at Clerkenwell Police Court, in which the Thames Valley Traction Co., Ltd., of Thorn Street, Reading, was summoned to appear before Mr. Walter Hedley, K.C., for alleged failure to reinstate in its employ a driver attached to the King's Cross Coach Station, after a period of military service, was withdrawn on May 8.

The summons was taken out under the provisions of Section 14 (1) of the National Service (Armed Forces) Act, 1939. The complainant was John Watts, a coach driver, who was employed by the company at the King's Cross Coach Station. The earlier hearing of the case was reported in our issue dated May 4.

ABRADFORD firm of motor coach operators provided coaches, hooked on a " contract " basis, in connection with a school old boys' association dance, the organizers of which advertised in a newspaper that " late buses" would be run. There was a sequel at Bradford City Police Court, last Week, when the proprietor of the firm, Mrs. Mary Dawson, trading as Messrs. Feather Brothers, Hall lags, was alleged to have caused the coaches to be used as stage carriages without the necessary licences.

The prosecution submitted that the dance was not a private function, within the meaning of the Road Traffic Act amendment of 1934, which permits separate fares to be collected— by the organizers of such functions in respect of motor coaches booked on a

" contract " basis. Had the dance been purely a private function, the prosecution contended, it would have been in order to advertise " late buses for members only," but as two police officers. in plain clothes obtained admission to the dance without being challenged, the function could not be described as being private.

For the defence, Mr. D. I. Sandelson (of the Legal Department of the C.M.U.A.'s North-eastern Division) submitted that so far as the defendant firm knew, the dance was a private function. They did not know that the " late buses" advertisement had appeared in the Press.

The summonses were dismissed on paymrnt of 23s. costs.

AFIER negotiations between trade unions and transport undertakings and reference to the Industrial Court, it has been ruled that for a probationary period of six months women employed on public-service vehicles will be paid not less than 90 per cent, of the commencing rate for adult males; after that period they will receive the full scale and usual increments.

RESTRICTING USE OF WEEKLY BUS TICKETS

ORGANIZED protest is to be made against the decision of the Regional Traffic Commissioner to limit the availability of Glasgow Corporation busseason tickets to 24 journeys on six days elf the week. Local Members of Parliament, housing scheme associations, and the Glasgow Borough Labour Party are to support the corporation in an appeal to the Minister of Transport.

The transport committee of the cor poration asked the Commissioner for sanction to raise the price of the weekly bus-season ticket from 3s. to 3s. 6d., but, in granting this request, Mr. A. Henderson also limited the availability of the tickets to 24 journeys on six days of the week. This would mean that the ticket would not be available on Sundays.

The sub-committee on finance and works decided, on May 13, to delay action on the matter until the Commissioner had announced his findings on the corporation's application concerning increase in fares on routes running outside the city boundaries.

Councillor William S. Reid, former convener of the transport committee, said that the Commissioner must have overlooked the fact that private bus companies which issue monthly season tickets did not restrict the number of journeys.

Before discussing the matter the members of the sub-committee were informed by the town clerk that Mr. A. Henderson, when he gave his findings, was sitting as Regional Traffic Commissioner under the emergency regulations and, therefore, his decision was final.

DURING the past municipal year there was a surplus of £11,513 of income over working expenses on the operation of the buses of Burton-onTrent Corporation. The disposal of the balance was considered at a meeting of the town council, when Alderman George Hill, chairman of the transport committee, said it had been considered advisable to repay the debt outstanding on the garage and equipment, and thus avoid annual loan charges.

Certain criticisms arose from this decision, but Alderman Hill said that there was a time when the transport department had been a drain on the rates, but now it was more than paying its way. No objection to contributing towards the rates would be made when the undertaking is in a sounder financial position, PLANNING GUISELEY'S BUS STATION

A FEATURE of Aireborough (York

shire) Urban District Council's scheme to construct a bus station at White Cross, GuiseIey, is a provision to place the exits in such a way that vehicles will avoid the busy junction of four roads at that point. The projected station wilL be for all buses at present passing through the junction, and he suggestion is that the junction will be out of bounds to bus traffic.

motorbuses, which are to be returned at a month's notice by either side. The reason is that the Merseyside city requires transport facilities and Oldham cannot use all its fleet on account of fuel rationing. The latter town had intended to complete, last year, its total change-over from trams to buses, but the war intervened. Hence, having more vehicles than it requires just now, it is able to accommodate the Liverpool authorities.

ROTHERHAM BUYS MORE SUNBEAM,B.T.H. TROLLEYBUSES LAST year an order was placed by Rotherham Corporation for a fleet of Sunbeam-B.T.H. trolleybus chassis, and this has now, been followed by another for a further eight chassis of the same type. These chassis are the Sunbeam-B.T.H. latest six-*heeled design, embodying several interesting new features.

Sunbeam Commercial Vehicles, Ltd., .Moorfield Works, Wolverhampton, already has in hand a number of important contracts for trolleybuses, both for home and overseas operators. Although the company has for months devoted a big proportion of its manufacturing facilities to work of direct national importance, municipal operators will be glad to learn that there has heen no cessation of activity on the trolleybus side.