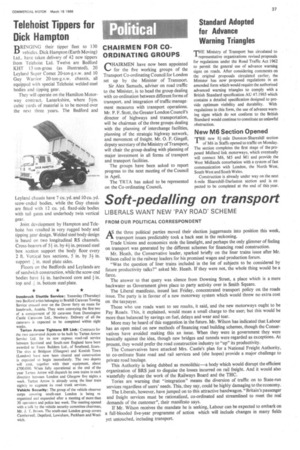 Page 39, 18th March 1966 — Telehoist Tippers for Dick Hampton
Close
Noticed an error?
If you've noticed an error in this article please click here to report it so we can fix it.
Keywords : Buses

They will operate on the Hamilton Motorway contract. Lanarkshire, where 511-m, cubic yards of material is to be moved over the next three years. The Bedford and

Joint development by Hampton and Telehoist has resulted in very rugged body and tipping gear design. Welded steel body design is based on two longitudinal RS channels. Cross-bearers of 51 in. by 44 in. pressed steel box section support the body floor every 2 ft. Vertical box sections, 5 in. by 34 in. support in. steel plate sides.

Floors on the Bedfords and Leylands are of sandwich construction, while the scow-end bodies have 1+ in. hardwood core and + in. top and ,-L;, in. bottom steel plate.

Innsbruck Shuttle Service: Yesterday (Thursday) two Bedford artics belonging to Box}WI Caravan Towing Service crossed over on the Dover ferry en route for Innsbruck, Austria. They were conveying the first two of a consignment of 30 caravans from Donnington Castle Caravans Ltd., Newbury. Delivery of all the caravans is expected to be completed within eight weeks.

Tartan Arrow lightens BR Link: Contracts for the two automated depots to be built by Tartan Arrow Service Ltd. for its new express road-rail service between Scotland and South-east England have been awarded to Essex Builders Ltd., of Southend, Essex. The sites at Bridgton (Glasgow) and Kentish Town (London) have now been • cleared and construction is expected to begin immediately. The two depots will cost, together with their equipment, about 000.000. When fully operational at the end of the year Tartan Arrow will dispatch its own trains in each direction between London and Glasgow five nights a week. Tartan Arrow is already using the liner train nightly to augment its road trunk services.

Vehicle Security: The group of the vehicle observer corps covering south-east London is being reorganized and expanded after a meeting of more than 30 operators and police last week. The meeting opened with a talk by the vehicle security committee chairman, Mr. J. T. Brown. The south-east London group covers Camberwell. Deptford, Lewisham, Peckham and Woolwich.