No Change of Normal User Without Need 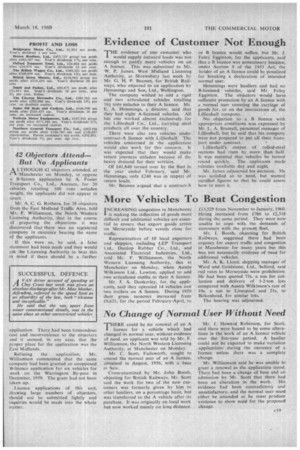 Page 55, 18th March 1960 — No Change of Normal User Without Need
Close
Noticed an error?
If you've noticed an error in this article please click here to report it so we can fix it.
Keywords : Failsworth, Business / Finance

THERE could be no renewal of an A licence for a vehicle which had changed its normal user, without evidence of need, an applicant was told by Mr. F. Williamson, the North Western Licensing Authority, at Manchester on Monday. Mr. C. Scott, Failsworth, sought to amend the normal user of an A licence, obtained in August, 1956; with a base at Sale.

Crass-examined by Mr. John Booth, objecting for• British Railways, Mr. Scott said the work for two of the new customers was formerly given by him to other hauliers, on a percentage basis, but was transferred to the A vehicle after its purchase. It was originally on local work but now worked mainly on long distance. Mr. J. Howard Robinson, for Scott, said there were bound to be some alterations in the work of an A licence vehicle over the five-year period. A haulier could not be expected to make variation applications during the currency of a licence unless there was a complete change.

Mr. Williamson said he was unable to grant a renewal as the application stood. There had been a Change of base and an admission by Mr. Scott that there had been an alteration in the work. His evidence had been contradictory and unsatisfactory, and the normal user must either be amended or he must produce evidence to show need for the proposed change.