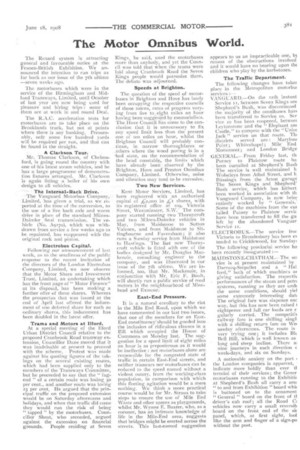 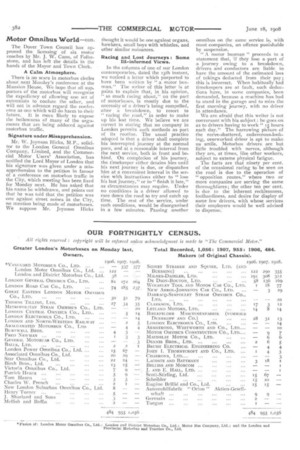 The Renard system is attracting general and favourable notice at the Franco-British Exhibition. We announced the intention to run trips as far back as our issue of the 7th ultimo —seven weeks ago.

The motorbuses which were in the service of the Birmingham and Midland Tramways, Limited, until October of last year are now being used for pleasure and hiring trips : some of them are at work in and round Deal.

The R.A.C. acceleration -tests for motorbuses are to take place on the Brooklands track, but not at points where there is any banking. Presumably, only some few hundred yards will be required per run, and that can be found in the straight.

Mr. Thomas Clarkson, of Chelmsford, is going round the country with one of his latest steam vehicles, and he has a large programme of demonstration fixtures arranged. Mr. Clarkson is again fitting a boiler of his own design to all vehicles.

The Vanguard Motorbus Company,.. Limited, hasgiven a trial, as we re-ported at the time .of the conversion, to the use of a live back axle and worm drive in place of the standard MilnesDaimler final transmission. The vehicle (No. A917o), which was withdrawn from service a few weeks ago to be repainted, has reappeared with. the original rack and pinion.

• Following our announcement of last week, as to the smallness of the public response to the recent invitation of the directors of the London Electrohus Company, Limited, we now observe that the Motor Share and Investment Trust, Limited, an undertaking which has the front page of " Motor Finance" at its disposal, has been making a further offer of these shares. Whereas the prospectus that was issued at the end of April last offered the inducement of one deferred share for each zo ordinary shares, this inducement has been doubled in the latest offer.

Trams and Motors at Ilford.

At a special meeting of the Ilford Urban District Council relative to the proposed Cranbrook Road tramway extension, Councillor Dane moved that it was inadvisable at present to proceed with the scheme, . Protest was made against his quoting figures of the takings on the several existing routes, which had been supplied only to the members of the Tramways Committee, but he proceeded to say that the "fagend " of a certain route was losing so per cent., and another route was lasing 25 per cent. He argued that the principal traffic on the proposed extension would be on Saturday afternoons and holidays, and when that traffic did come they would run the risk of being " tapped " by the motorbuses. Councillor Sheat, who seconded, argued against the extension on financial grounds. People residing at Seven Kings, he said, used the motorbuses more than anybody, and yet the Council was told that when the trams were laid along Cranbrook Road the Seven Kings people would patronise them. The debate was adjourned.

The question of the speed of motorbuses in Brighton and Hove has lately been occupying the respective councils of those towns, rates of progress varying from five to eight mile an hour having been-suggested by memorialists. The Hove Council has come to the conclusion that it is unnecessary to fix any speed limit less than the present one of ten miles an hour, whilst the Brighton Council will probably continue, in narrow .thoroughfares or others where the wood paving is in a 'bad .state, on the recommendation of the. head constable, the limits which have already been observed by the Brighton, Hove and Preston Omnibus Company, Limited. Otherwise, noise -and vibration may tend to be excessive.

Kent Motor Services, Limited, has been registered with an authorised capital of _4:2,000 in Li shares, with its registered office at roe, Victoria Street, Westminster, S.W.' The company started running two Thornycroft and two .Milnes-Daimler, vehicles in May, from Maidstone to Sutton Valence, and from Maidstone to Sittingbourne and Faversham; it also runs a Sunday service from Maidstone to Hastings. The fast new Thornycroft vehicle is fitted with one of the bodies designed by Mr. Douglas Mackenzie, consulting engineer to the company, and was illustrated in our issue of the 7th ultimo. We are informed, too, that Mr. Mackenzie, in conjunction with Mr. Eric F. Boult, . will shortly run a public service of road motors in the neighbourhood of Minehead and Exmoor.

It is a natural corollary to the riot in the Mile End Road, upon which we have commented in our last two issues, that one of the members for an EastEnd constituen,cy'should be goaded into the inclusion of ridiculous clauses in a Bill which occupied the House of Commons on Monday last. The suggestion for a speed limit of eight miles: an hour is as preposterous as it would be ineffective : not motorbuses alone are responsible for the congested state of traffic in certain East-End streets, and neither tramcars nor motorbuses can be reduced to the speed named without a violent outcry, from the working-class population, in comparison with which this fleeting agitation would he a mere nothing. We think a more practical course would be for Mr.-Straus to take steps to ensure the use of Mile End Waste and other spaces as playgrounds, whilst Mr. Wynne E. Baxter, who, as a coroner, has an intimate knowledze of life in the Mile-End area, suggests that bridges might be erected across the streets. This last-named suggestion appears to us an impracticable one, b3 reason of the obstructions involved and it would have no bearing upon th( children who play by the kerbstones.

The following changes have taker place in the Metropolitan motorlate services :— VANGUARD.—On the rzlh instant Service i r, between Seven Kings and Shepherd's Bush, was discontinued the majority of the omnibuses hay( been transferred to Service ro. Ser vice ro has been reopened, betweer Leytonstone and the Elephant am Castle," to compete with the "Unior • Jack " service on that route. Tb.

districts served are : Marylanr Point; Whitechapel ' • Mile. End Monument; and London -Bridge GENERAL.--From Friday last, th Putney to Plaistow route ha been curtailed at Shepherd's Bush The service is well maintained b. Wolseleys from Athol Street, and b Btissings from the Acton garag The Seven Kings and Shepherd' Bush service, which has hithert been worked in association with th Vanguard Company, is n-ow helm entirely worked by " Generals.' Some of the machines from .the cur tailed Putney to Plaistow servic have been transferred to fill the ga left by the abandoned Vanguar Service rt.

ELECTROBUS.—The service fror Victoria to Brondesbury has been e), tended to Cricklewood, for SundayE The following provincial service ha

been recently inaugurated :— MAIDSTONE-CHATHAM.--The sei vice is at present maintained by, Darracq-Serpollet and a " Hal ford," both of which machines am giving satisfaction. The respectiv performances of the steam and petrr systems, running as they are und( the same conditions, should yiel some extremely interesting dot( The original fare was sixpence eac way, but this has now been raised eightp-ence and full car loads are r. guiarly carried. The competitil railway fare is one shilling singl. with a shilling return fare on We' nesday afternoons. The route is very tryiirg one ; it includes Bit Bell Hill, 'Which is well known as long and steep incline. There al nine journeys in each direction week-days,. and six on Sundays.

A noticeable anxiety on the part I the London companies is apparent, • indicate more boldly than ever ti termini of their services; the Gener . motorbuses running to the Exhibitic at Shepherd's Bush all carry a srm "to and from Exhibition "board whir is -buttoned on to the ornament " General " board on the front of tl driver's cab roof ; all the Road C: vehicles now carry a small reversib board on the front end of the sic panel, which, at first sight, lool like the arm and finger of .a sign-po without the post.

The Dover Town Council has approved the licensing of six motor coaches by Mr. J. W. Cann, of Folkestone, and has left the details in the hands of the Mayor and Town Clerk.

There is no scare in motorbus circles about next Monday's conference at the Mansion House. We hope that all supporters of the motorbus will recognise the expediency of allowing one set of extremists to confute the other, and will not in advance regard the conference as one which will do harm to their future. It is more likely to expose the hollowness of many of the arguments that are being adduced against motorbus traffic.

Mr. 'W. joynson Hicks, M.P., solicitor to the London General Omnibus Company, Limited, and the Commercial Motor Users' Association, has notified the Lord Mayor of London that his signature was given under a misapprehension to the petition in favour of a conference on motorbus traffic in the City, which meeting has been fixed for Monday next. He has asked that his name be withdrawn, and points out that he was told that the petition was one against street noises in the City, no mention being made of motorbuses. We suppose Mr. Joynson flicks thought it would be one against organs, hawkers, small boys with whistles, and other similar nuisances.

In the columns of one of our London contemporaries, dated the 13th instant, we noticed a letter which purported to have been written by "a motor busman." The writer of this letter is at pains to explain that, in his opinion, " so much racing about," on the part of motorbuses, is mostly due to the necessity of a driver's being compelled, after a breakdown, to resort to " racing the road," in order to make up his lost time. We believe we are correct in stating that no company in London permits such methods as part of its routine. The usual practice adopted is that a driver shall complete his interrupted journey at the normal pace, and at a reasonable interval from the next service, both in front and behind. On completion of his journey, the timekeeper either detains him until his next journey is due, or dispatches him at a convenient interval in the service with instructions either to " lose his last journey," or to" finish it late," as circumstances may require. Under no conditions is a driver allowed to race down the road to try and catch up time. The rest of the service, under such conditions, would be disorganised in a few minutes. Passing another omnibus on the same service is, with most companies, an offence punishable by suspension. "A motor busman " proceeds to a statement that, if they lose a part of a journey owing to a breakdown, drivers and conductors are liable to have the amount of the estimated loss of takings deducted from their pay; this is incorrect. When habitually bad timekeepers are at fault, such deductions have, in some companies, been demanded, because a machine has had to stand in the garage and to miss the first morning journey, with no driver in attendance.

We are afraid that this writer is not conversant with his subject he goes on as to drivers having to work" 15 hours each day." The harrowing picture of the nerve-shattered, cadaverous-looking, overworked driver is apt to make us smile. Motorbus drivers are but little troubled with nerves, although they are, at times, like other workers, subject to exteme physical fatigue.

The facts are that ninety per cent. of the occasional racing to be seen on the road is due to the operation of " opposition routes," where two or more companies are serving the same thoroughfares ; the other ten per cent. is due to the inherent recklessness, foolhardiness, and desire for display of some few drivers, with whose services their employers would be well advised to dispense.