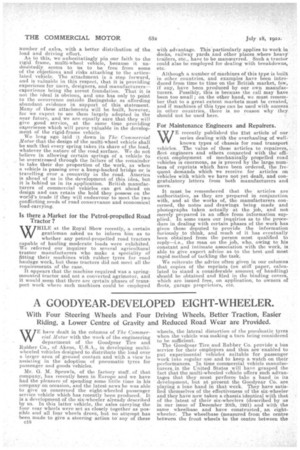 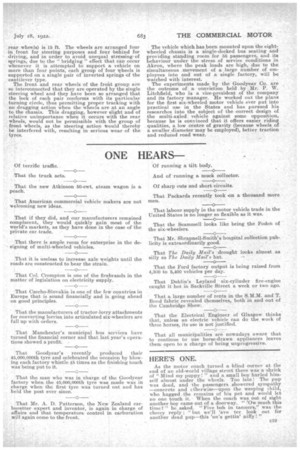 E have dealt in the columns of The Commercial Motor with the work of the engineering department of the Goodyear Tire and Rubber Co., of Akron, U.S.A., in developing multiwheeled vehicle's designed to distribute the load over a larger area of ground contact and with a view to assisting in the adoption of pneumatic tyres for passenger and goods vehicles.

Mr. G. M. Sprowis, of the factory staff_ of that company, has recently been in Europe and we have had the pleasure of spending some Irate time in his company on occasion, and the latest news he was able to give us concerned the eight-wheeled passenger service vehicle which has recently been produced. It is a development of the six-wheeler already described by us. In this -latter vehicle, the axles carrying the four rear wheels were set as closely together as possible and all four wheels drove, but no attempt has been made to give a steering action to any of these

wheels, the lateral distortion of the pneulniatic tyres when the vehicle was making a turn being considered to be sufficient.

The Goodyear Tire and Rubber Co. provide a bus service for their employees and thus are-enabled to put experimental vehicles: suitable for passenger work into regular use and to keep a watch on their perforhances. In time commercial vehicle manufacturers in the United States will have grasped the fact that the multi-wheeled vehicle offers such advantages that they must perforce take a hand in its development, but at present the Goodyear Co. are playing a lone hand in that work. They have satisfied themselves of the effectiveness of the six-wheeler and they have now taken a chassis identical with that of the latest of their six-wheelers (described by us in our issue of December 20th, 1921) and With the same wheelbase and have constructed, an eightwheeler. The wheelbase (measured from the centre between the front wheels to the centre between the

rear wheels) is 15 ft. The wheels are arranged four in front for steering purposes and four behind for driving, and in order to avoid unequal stressing of springs, due to the " bridging " effect that can occur whenever it is attempted to support a vehicle on more than four points, each group of four zheels is supported on a single pair of inverted springs of the cantilever type.

The front and rear wheels of the front group are so interconnected that they are operated by the single steering wheel and they have been so arranged that the lock of each pair conforms with its particular turning circle, thus permitting proper tracking with no dragging action when the wheels are at an angle to the chassis. This dragging, however slight and of relative unimportance when it occurs with the rear wheels, would not be permissible with the group of front wheels, as the steering. action tvould thereby be interfered with, resulting in serious wear of the tyres. The vehicle which has been mounted upon the eightwheeled chassis is a. single-decked bus seating and providing standing room for 55 passengers, and its behaviour under the stress of service conditions in Akron, where the peak loads are high, due to the simultaneous movement of a large number of employees into and out of a single factory, will be watched with interest.

The experiments made by the Goodyear Co. are the outcome of a conviction held by Mr. P. W. Litchfield, who is a vice-president of the company and its factory manager. He worked out the plans for the first six-wheeledmotor vehicle ever put into practical use in the States and has pursued his researches into the subject of the -correct design of the multi-axled vehicle against some opposition, because he is convinced that it offers easier riding qualities, a low centre of gravity (because wheels of • a smaller, diameter may be employed), better traction and reduced road wear.