Strong Justificatic Change of Base is Needed, 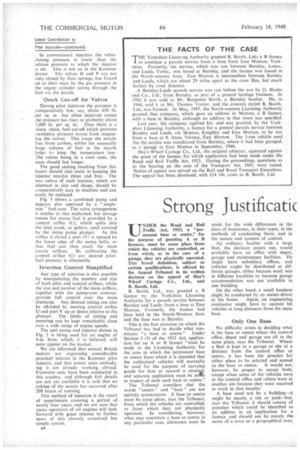 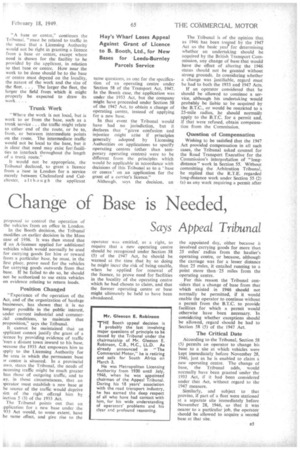 Page 12, 18th February 1949 — Strong Justificatic Change of Base is Needed,
Close
Noticed an error?
If you've noticed an error in this article please click here to report it so we can fix it.

UNDER the Road and Rail Traffic Act, 1933, a "permanent base or centre," for the purpose of granting A or B licences, must be some place from which the vehicles are controlled, or from which, as in the case of a garage, they are physically operated. This broad definition, subject to certain qualifications, is offered by the Appeal Tribunal in its written decision on the appeal of Hay's Wharf Cartage Co., Ltd., and B. Booth, Ltd.

B. Booth, Ltd., was granted a B licence by the Yorkshire Licensing Authority for a parcels service between Burnley and Leeds, from a base at East Morton. Formerly, the licence had been held in the North-Western Area and the base was at Burnley.

stitutes "a base or centre." Under Section 5 (3) of the 1933 Act, application for an A or B licence "must be made to the Licensing Authority for the area in which the permanent base or centre from which it is intended that the authorized vehicles will normally be used for the purpose of carrying goods for hire or reward is situategl, and separate application must be mak in respect of each such base or centre."

The Tribunal considers that the words "centre" and "base" are not entirely synonymous. A base or centre must be some place, says the Tribunal, from which the vehicles are controlled, or from which they are physically operated. In considering, however, what may constitute a base or centre in any particular case, allowance must be made for the wide differences in the sizes of businesses, in their types, in the methods of conducting them, and in the nature and systems of control.

An ordinary haulier with a large fleet, the decision points out, would probably have an office with depot, garage and maintenance facilities. He might have subsidiary offices, and vehicles might be distributed at different garages, either because work was in different localities or because garage accommodation was not available in one building.

On the other hand, a small business might be conducted by an owner-driver at his home. Again, an engineering contractor might have to operate his vehicles at long distances from his main base.

A base need not be a building—it might be merely a site or yard—but, says the Tribunal, it should consist of premises which could be identified as an address in an application for a licence, and should not be merely the name of a town or a geographical area.

"A base or centre," continues the Tribunal, "must be related to traffic in the sense that a Licensing Authority would not be right in granting a licence from a base or centre, except where need is shown for the facility to be provided by the applicant, in relation to that base or centre. How near the work to be done should be to the base or centre must depend on the locality, the nature of the work and the size of the fleet. . . The larger the fleet, the larger the field from which it might properly be expected to draw its work. . . .

Trunk Work "Where the work is not local, but is work to or from the base, such as a trunk service . .. the traffic might relate to either end of the route, or be to, from, or between intermediate points on the route. The intermediate traffic would not be local to the base, but it is clear that need may exist for facilities to interlock throughout the length of a trunk route."

It would not be appropriate, the Tribunal declared, to grant a licence from a base in London for a service merely between Chelmsford and Colchester. alt hough the applicant

proposed to control the operation of the vehicles from an office in London.

In the Booth decision, the Tribunal modifies an earlier decision in the Moss case of 1936_ It was then stated that if an A-licensee applied for additional vehicles which would normally be used for carrying goods for hire or reward from a particular base, he must, in the first place, prove need for the vehicles for carrying goods outwards from that base. If he failed to do so, he should not be authorized to use extra vehicles on evidence relating to return loads.

"Experience of the operation of the Act, and of the organization of haulage businesses, has shown that it is no longer possible in the public interest, under current industrial and commersial conditions, to maintain that proposition," says the Tribunal.

it cannot be maintained that an tpplicant cannot justify the grant of a iicence by providing evidence of traffic .'rons a distant town inward to his base, secause the 1933 Act empowers him to ipply to the Licensing Authority for he area in which the permanent base sr centre is situated. In a provincial own, states the Tribunal, the needs of morning traffic might be much greater han those of outgoing traffic, and to ay, in those circumstances, that . an iperator must establish -a new base at he source of the traffic would deprive tim of the right offered him by :ection 5 (3) of the 1933 Act.

The Tribunal points out that an .pplication for a new base under the 933 Act would, to some extent, have he same effect, and give rise to the same questions, as one for the specification of an operating centre under Section 58 of the Transport Act, 1947. In the Booth case, the application was under the 1933 Act, but the company might have proceeded under Section 58 of the 1947 Act, to obtain a change of operating centre, instead of applying for a new base.

In that event the Tribunal would have had no jurisdiction, but it declares that "grave confusion and injustice might arise if principles generally adopted by Licensing Authorities on applications to specify operating centres (other than temporary operating centres) were to be different front the principles which would be applicable in accordance with decisions of this Tribunal as to a 'base or centre' on an application for the grant of a carrier's licence."

Although, says the decision, an

operator was entitled, as a right, to require that a new operating centre should be recognized under Section 58 (5) of the 1947 Act, he should be warned at the time that by so doing he might incur the risk of being unable, when he applied for renewal of the licence, to prove need for facilities in the locality of the operating centre which he had chosen to claim, and that the former operating centre or base might ultimately be held to have been abandoned.

The Tribunal is of the opinion that as 1946 has been treated by the 1947 Act as the basic year for determining whether an undertaking should be acquired by the British Transport Commission, any change of base that would have the effect of altering the 1946 status should not be granted without strong grounds. In considering whether a change was justifiable, regard must be had to both the 1933 and 1947 Acts.

If an operator considered that he should be allowed to continue a service, although his undertaking would probably be liable to be acquired by the B.T.C., or would be restricted to a 25-mile radius, he should normally apply to the B.T.C. for a permit and, if that were refused, obtain compensation from the Commission.

Wishing to be satisfied that the 1947 Act provided compensation in all such cases, the Tribunal asked counsel for the Road Transport Executive for the Commission's interpretation of "longdistance" work in Section 55. Without committing the Arbitration Tribunal, he replied that the R.T.E. regarded long-distance work under Section 55 (2) (a) as any work requiring a permit after the appointed day, either because it involved carrying goods for more than 25 miles' radius from the haulier's operating centre, or because, although the carriage was for a lesser distance than 25 miles, it entailed running to a point more than 25 miles 'from the operating centre.

For this reason the Tribunal considers that a change of base from that which existed in 1946 should not normally be permitted, if it would enable the operator to continue without a permit from the B.T.C. to provide facilities for which a permit would otherwise have been necessary. In considering whether exceptions should be allowed, regard should be had to Section 58 (5) of the 1947 Act.

According to the Tribunal, Section 58 (5) permits an operator to change his base to a site at which vehicles were kept immediately before November 28, 1946, just as he is enabled to claim a new operating centre. The change of base, the Tribunal adds, would normally have been granted under the 1933 Act, if it had been considered under that Act, without regard to the 1947 measure.

Similarly, and subject to that proviso, if part of a fleet were stationed at a separate site immediately before November 28, 1946, so that it was nearer to a particular job, the operator should be allowed to acquire a second base at that site.