1. No dosh for the Bosch 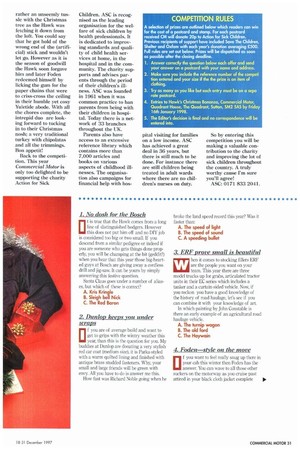 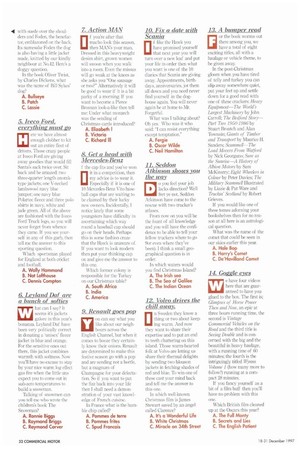 Page 33, 18th December 1997 — 1. No dosh for the Bosch
Close
Noticed an error?
If you've noticed an error in this article please click here to report it so we can fix it.
Keywords : Edwin Foden, Sons & Co., Sandbach, Question

Ot is true that the Hawk comes from a long line of distinguished bodgers. However this does not put him off and no DIY job is considered too big or two small. If you descend from a similar pedigree or indeed if you are someone who gets things done properly, you will be champing at the bit (gedclit?) when you hear that this year those big-hearted guys at Bosch are giving away a cordless drill and jig-saw It can be yours by simply answering this festive question.

Santa Claus goes under a number of aliases, but which of these is correct?

2. Dunlop keeps you under wraps

Of you are of average build and want to get to grips with the wintry weather this year, than this is the question for you. My buddies at Dunlop are donating a very stylish red car coat (medium size), it is Parka-styled with a warm quilted lining and finished with antique brass studded fasteners. Why, your small and large friends will be green with envy All you have to do is answer me this.

How fast was Richard Noble going when he broke the land speed record this year? Was it faster than:

hen it comes to stocking fillers ERF are the people you want on your team. This year there are three model trucks up for grabs, articulated tractor units in their EC series which includes a tanker and a curtain-sided vehicle. Now, if you reckon you have a good knowledge of the history of road haulage, let's see if you can combine it with your knowledge of art.

In which painting by John Constable is there an early example of an agricultural road haulage vehicle.

A. The turnip wagon B. The old ford

Of you want to feel really snug up there in your cab this winter then Foden has the answer. You can wave to all those other suckers on the motorway as you cruise past attired in your black cloth jacket complete

with suede over the shoulders and Foden, the benefactor, emblazoned on the back. Its namesake Foden the dog is also having a little jacket made, knitted by our kindly neighbour at No.42. Here's a doggyquestion.

In the book Oliver Twist, by Charles Dickens, what was the name of Bill Sykes' dog?

A. Bullseye B. Patch C. Lassie

5. Iveco Ford, everything must. go

III ere we have almost

enough clobber to kit out an entire fleet of drivers. Those crazy people at Iveco Ford are giving away goodies that would fill Santa's sack twice over. Sit back and be amazed: two three-quarter length anoraktype jackets; one V-necked lambswool navy blue jumper; one navy blue Polartec fleece and three polo shirts in navy, white and jade green. All of the above are fashioned with the lveco Ford Truck logo, so you will never forget from whence they came. If you see yourself in any of this garb, then tell me the answer to this sporting question.

Which sportsman played for England at both cricket and football, A. Wally Hammond B. Nat Lofthouse C. Dennis Compton

6. Leyland Daf are a bunch of softies

hat can I say? It seems it's jackets galore in this year's bonanza. Leyland Daf have been very politically correct in donating a 'unisex' fleece jacket in blue and orange. For the sensitive ones out there, this jacket combines warmth with softness. Now you'll have no excuse to stay by your nice warm log effect gas fire when the little uns expect you to come out in sub-zero temperatures to build a snowman.

Talking of snowmen can you tell me who wrote the children's book The Snowman?

af you're after that macho look this season, then MAN's your man. Dressed in this heavyweight denim shirt, grown women will swoon when you walk into a room. Even the missus will go weak at the knees as she asks you "One sausage or two?" Alternatively it will be good to wear if it is a bit parky of a morning. If you want to become a Pierce Brosnan look-a-like then tell me: Under what monarch was the sending of Christmas cards introduced?

8. Get a head with Mercedes-Benz

Oit in a competition, then my advice is to wear it. Especially if it is one of 10 Mercedes-Benz Vito baseball caps that are waiting to be claimed by their lucky new owners. Incidentally, I notice lately that some youngsters have difficulty in ascertaining which way round a baseball cap should go on their heads. Perhaps this is some fashion craze that the Hawk is unaware of. If you want to look modern then put your thinking cap on and give me the answer to this one.

Which former colony is responsible for the Turkey on our Christmas table?

ou can say what you like about our neighbours across the English Channel, but when it comes to booze they certainly know their onions, Renault are determined to make this festive season go with a pop and are sending not a bottle, but a magnum of Champagne for your delectation. So if you want to put the fizz back into your life then I shall need a demonstration of your vast knowledge of French cuisine.

In France what is the humble chip called?

Df like the Hawk you have promised yourself that next year you will turn over a new leaf and put your life in order then what you want is one of the 10 diaries that Scania are giving away. Appointments, birthdays, anniversaries, jot them all down and you need never find yourself in the doghouse again. You will never again be at home to Mr. Forgetful.

What was I talking about? Oh yes. Who was it who said: "I can resist everything except temptation."

11. Seddon Atkinson shows you the way

o you feel your job lacks direction? Well fret ye not. Seddon Atkinson have come to the rescue with two trucker's atlases.

From now on you will be the fount of all knowledge and you will have the confidence to be able to tell your fellow truckers where to go 9or even where they've been). I think a small geographical question is in order.

In which waters would you find Christmas Island?

A. The Irish sea B. The Sea of Galilee C. The Indian Ocean

12. Volvo drives the chill away.

0 n Sweden they know a thing or two about keeping warm. And now they want to share their expertise and to put an end to teeth chattering on this island. Those warm-hearted folk at Volvo are letting us share their thermal delights by sending two blouson jackets in fetching shades of red and blue. 'lb win one of these cast your mind back and tell me the answer to this one.

In which well-known Christmas film is James Stewart saved by an angel called Clarence?

A. It's a Wonderful Life B. White Christmas

CI or the book worms out

there among you, we have a total of eight exciting titles, all with a haulage or vehicle theme, to he given away.

In the post-Christmas gloom when you have tired of telly and turkey you can slip away somewhere quiet, put your feet up and settle down for a good read with one of these crackers: Heavy Equipment—The World's Largest Machinery by John Carroll; The Bedford Story— Par! Two 195(1-1986 by Stuart Broatch and Alan Townsin; Giants of Timber and Transport by Maurice H. Sanders; Scammell— The Load Movers From Watford by Nick Georgano; Sure as the Sunrise—A History of Albion Motors by Sam McKinstry; Eight Wheelers in Colour by Peter Davies; The Military Scammell Illustrated by Lizzie & Pat Ware and Truckin' Scotland by Robert Grieves.

If you would like one of these tomes adorning your bookshelves then for no reason at all here is an astrological question.

What was the name of the comet that could be seen in our skies earlier this year.

e have four videos here that are guaranteed to have you glued to the box. The first is; Glimpses of Horse Power Then and Now, an epic at three hours running time, the second is Vintage Commercial Vehicles on the Road and the third title is Seeing Double and is concerned with the big and the beautiful in heavy haulage, with a running time of 60 minutes; the fourth is the intriguingly titled Wynns Volume I (how many more to follow?) running at a compact 28 minutes.

If you fancy yourself as a bit of a film buff then you'll have no problem with this one.

Which British film cleaned up at the Oscars this year?

A. The Full Monty B. Secrets and Lies C. The English Patient