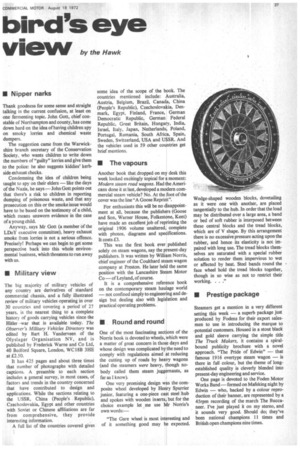 Page 39, 18th August 1972 — bird's eye
Close
Noticed an error?
If you've noticed an error in this article please click here to report it so we can fix it.
Keywords : Steam Wagon, Edwin Foden, Sons & Co., Wagon

Thank goodness for some sense and straight talking in the current confusion, at least on one fermenting topic. John Gott, chief constable of Northampton and county, has come down hard on the idea of having children spy on smoky lorries and chemical waste dumpers.

The suggestion came from the Warwickshire branch secretary of the Conservation Society, who wants children to write down the numbers of "guilty" lorries and give them to the police: he also suggests kiddies' kerbside exhaust checks.

Condemning the idea of children being taught to spy on their elders — like the days of the Nazis, he says —John Gott points out that there's a risk to children in reporting dumping of poisonous waste, and that any prosecution on this or the smoke issue would have to be based on the testimony of a child, which means unsworn evidence in the case of a young child.

Anyway, says Mr Gott (a member of the LDoY executive committee), heavy exhaust smoke from lorries is not a serious offence. Precisely! Perhaps we can begin to get some perspective back into this whole environmental business, which threatens to run away with us.

The big majority of military vehicles of any country are derivatives of standard commercial chassis, and a fully illustrated review of military vehicles operating in over 30 countries and covering a period of 27 years, is the nearest thing to a complete history of goods carrying vehicles since The Hitler -war that is available today. The Observer's Military Vehicles Directory was edited by Bart H. Vanderveen of the Olyslager Organisation NV, and is published by Frederick Warne and Co Ltd, 40 Bedford Square, London, WC 18B 3HE at £2.50.

It has 425 pages and about three times that number of photographs with detailed captions. A preamble to each section includes a general survey, in most cases, of factors and trends in the country concerned that have contributed to design and applications. While the sections relating to the USSR. China (People's Republic), Czechoslovakia, Egypt and other countries with Soviet or Chinese affiliations are far from comprehensive, they provide interesting information.

Another book that dropped on my desk this week looked excitingly topical for a moment: Modern steam road wagons. Had the Americans done it at last, developed a modem commercial steam vehicle? No. At the foot of the cover was the line "A Goose Reprint".

For enthusiasts this will be no disappointment at all, because the publishers (Goose and Son, Warner House, Folkestone, Kent) have made an excellent job of reprinting the original 1906 volume unaltered, complete with photos, diagrams and specifications. It costs £3.

This was the first book ever published solely on steam wagons, say the present-day publishers. It was written by William Norris, chief engineer of the Coulthard steam wagon company at Preston. He later held the same position with the Lancashire Steam Motor Co — of Leyland, of course.

It is a comprehensive reference book on the contemporary steam haulage world — not confined simply to engineering and design but dealing also with legislation and practical operating problems.

One of the most fascinating sections of the Norris book is devoted to wheels, which were a matter of great concern in those days and whose design was complicated by the need to comply with regulations aimed at reducing the cutting up of roads by heavy wagons (and the steamers were heavy, though nobody called them steam juggernauts, as far as I know).

junior, featuring a one-piece cast steel hub and spokes with wooden inserts, but for the choice example let me use Mr Norris's own words:—

"The Gare wheel is most interesting and of it something good may be expected. Wedge-shaped wooden blocks, dovetailing as it were one with another, are placed tangentially to the hub. In order that the load may be distributed over a large area, a band or bed of soft rubber is interposed between these central blocks and the tread blocks, which are of V shape. By this arrangement there is no excessive pressure acting upon the rubber, and hence its elasticity is not impaired with long use. The tread blocks themselves are saturated with a special rubber solution to render them impervious to wet or affected by heat. Steel bands round the face wheel hold the tread blocks together, though in so wise as not to restrict their working. . . ."

Steamers get a mention in a very different setting this week — a superb package just produced. by Fodens for their export salesmen to use in introducing the marque to -potential customers. Housed in a stout black and gold sleeve carrying the simple title The Truck Makers, it contains a spiralbound publicity brochure with a novel approach. "The Pride of Edwin" — that famous 1916 overtype steam wagon — is there in full colour, but the theme of longestablished quality is cleverly blended into present-day engineering and service.

One page is devoted to the Foden Motor Works Band formed on Mafeking night by Edwin — who, backed by a colour reproduction of their banner, are represented by a 45rpm recording of the march The Buccaneer. I've just played it on my stereo, and it sounds very good. Should do; they've been national champions 11 times and British open champions nine times.