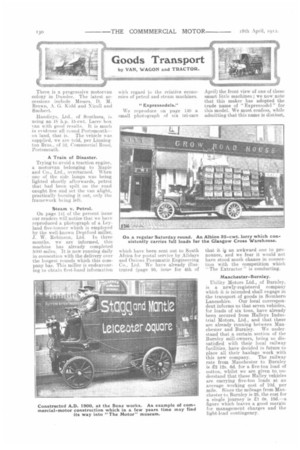 Page 6, 18th April 1912 — Goods Transport
Close
Noticed an error?
If you've noticed an error in this article please click here to report it so we can fix it.

by VAN, WAGON and TIIACTOR.

There is a progressive motorvan colony in Dundee. The latest accessions include Messrs. D. M. Brown, A. G. Kidd and Nicoll and Smibert.

llandleys, Ltd., of Southsea, is using an 18 h.p. 15-cwt. Laere box van with good results. It is much in evidence all round Portsmouth— on land, that is. The vehicle was supplied, we are told, per Linnington Bros., of 52, Commercial Road, Portsmouth.

A Train of Disaster.

Trying to avoid a traction engine, a motorvan belonging to Maple and Co., Ltd., overturned. When one of the side lamps was being lighted shortly afterwards, petrol that had been spilt on the road caught fire and set the van alight, practically burning it out, only the framework being left.

On page 141 of the present 'issue our readers will notice that we have reproduced a photograph of a Leyland five-tonner which is employed by the well-known Deptford miller, J. W. Robinson, Ltd. In three months, we are informed, this machine has already completed 5090 miles. It is now running daily in connection with the delivery over the longest rounds which this company has. This miller is endeavouring to obtain first-hand information

with regard to the relative economies of petrol and steam machines.

We reproduce on page 140 a small photograph of six tri-cars which have been sent out to South Africa for postal service by Alldays and Onions Pneumatic Engineering Co.. Ltd. We have already illustrated (page 95, issue for 4th of April) the front view of one of these smart little machines ; we now note that this maker has adopted the trade name of " Expressodel " for this model. We must confess, while admitting that this name is distinct, that it 4 an awkward one to pronounce, and we fear it would not have stood much chance in connection with the competition which

The Extractor" is conducting.

Utility Motors Ltd., of Burnley, is a newly-registered company which it is intended shall engage in the transport of goods in Southern Lancashire. Our local correspondent informs us that seven vehicles, for loads of six tons, have already been secured from Halleys Industrial Motors, Ltd., and that these are already running between Man chester and Burnley. We under• stand that a certain section of the Burnley mill-owners, being so dissatisfied with their local railway facilities, have decided in future to place all their haulage work with this new company. The railway rate from Manchester to Burnley is £2 12s. 6d. for a five-ton load of cotton, whilst we are given to. understand that these Halley vehicles are carrying five-ton loads at an average working cost of 10d. per mile. Since the mileage from Manchester to Burnley is 25. the cost for

a single journey is Os. 10d.—a figure which leaves a good margin for management charges and the light-load contingency.