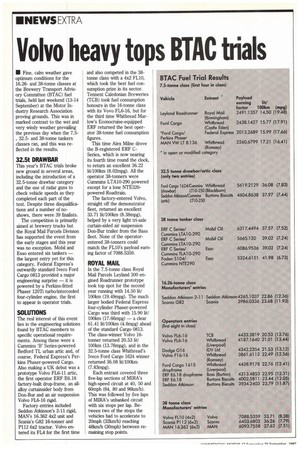 • Fine, calm weather gave optimum conditions for the 16.26and 38-tonne classes at the Brewery Transport Advisory Committee (BTAC) fuel trials, held last weekend (13-14 September) at the Motor Industry Research Association proving grounds. This was in marked contrast to the wet and very windy weather prevailing the previous day when the 7.5, 32.5and 38-tonne tankers classes ran, and this was reflected in the results.

This year's BTAC trials broke new ground in several areas, including the introduction of a 32.5-tonne drawbar category and the use of radar guns to check vehicle speeds as they completed each part of the test. Despite three disqualifications and a number of noshows, there were 39 finalists.

The competition is primarily aimed at brewery trucks but the Royal Mail Parcels Division has supported the event from the early stages and this year was no exception. Mobil and Esso entered six tankers the largest entry yet for this category. Federal Express's outwardly standard Iveco Ford Cargo 0813 provided a major engineering surprise it is powered by a Perkins-fitted Phaser 120Ti turbo/intercooled four-cylinder engine, the first to appear in operator trials.

The real interest of this event lies in the engineering solutions found by BTAC members to specific operational requirements. Among these were a Cummins 'B' Series-powered Bedford TL urban artic and, of course, Federal Express's Perkins Phaser-powered Cargo. Also making a UK debut was a prototype Volvo FL6-11 artic, the first operator ERF E6.18 factory-built drop-frame, an allalloy curtainsider body from Don-Bur and an air suspension Volvo FL6-16 rigid.

This time Alex Milne drove the B-registered ERF CSeries, which is now nearing its fourth time round the clock, to return an excellent 36.22 lit/1001cm (8.02mpg). All the operator 38-tonners were Cummins LTA10-290 powered except for a lone NTE320powered Roadtrain.

The factory-entered Volvo, straight off the demonstrator fleet, returned an excellent 33.71 lit/100km (8.38mpg), helped by a very light tri-axle curtain-sided air suspension Don-Bur trailer from the Bass fleet. None of the operatorentered 38-tonners could match the FLIO's payload earning factor of 7088.5359.

Each entrant covered three five-lap sections of MIRA's high-speed circuit at 40, 50 and 60mph (64, 80 and 96km/h). This was followed by five laps of MIRA's unbanked circuit with six stops per lap. Between two of the stops the vehicles had to accelerate to 20mph (321cm/h) reaching 481crn/h (30mph) between remaining stop points.