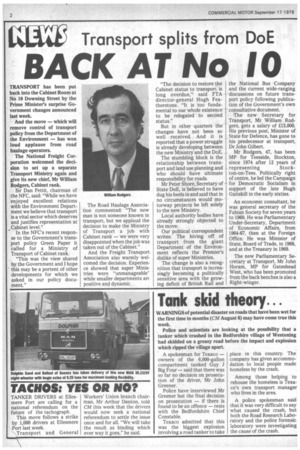 TRANSPORT has been put back into the Cabinet Room at No 10 Downing Street by the Prime Minister's surprise Government changes announced last week.

And the move — which will remove control of transport policy from the Department of .the Environment — has won loud applause from road haulage operators.

The National Freight Corporation welcomed the decision to set up a separate Transport Ministry again and give its new chief, Mr William Rodgers, Cabinet rank.

Sir Dan Pettit, chairman of the NFC, said: "While we have enjoyed excellent relations with the Environment Department we believe that transport is a vital sector which deserves and justifies representation at Cabinet level."

In the NFC's recent response to the Government's transport policy Green Paper it called for a Ministry of Transport of Cabinet rank.

"This was the view shared by the Government and I hope this may be a portent of other developments for which we asked in our policy document." The Road Haulage Association commented: "The new man is not someone known in transport, but we applaud the decision to make the Ministry of Transport a job with Cabinet rank — we were very disappointed when the job was taken out of the Cabinet."

And the Freight Transport Association also warmly welcomed the decision. Experience showed that super Ministries were "unmanageable'. while smaller departments arE positive and dynamic. "The decision to restore the Cabinet status to transport is long overdue," said FTA director-general Hugh Featherstone, "It is too fundamental to OUT whole existence to be relegated to second status."

But in other quarters the changes have not been so well received. And it is reported that a power struggle is already developing between the new Ministry and the DoE.

The stumbling block is the relationship between transport and land use planning and who should have ultimate responsibility for roads.

Mr Peter Shore, Secretary of State DoE, is believed to have dug his heels in and said that in no circumstances would motorway projects be left solely to the new Ministry.

Local authority bodies have already strongly objected to the move.

Our political correspondent writes: The hiving off of transport from the giant Department of the Environment reflects the Premier's dislike of super Ministries.

The change is also a recognition that transport is increasingly becoming a politically sensitive area with the growing deficit of British Rail and the National Bus Company and the current wide-ranging discussions on future transport policy following publication of the Government's own consultative document.

The new Secretary for Transport, Mr William Rodgers, gets a salary of £13,000. His previous post, Minister of State for Defence, has gone to his predecessor at transport, Dr John Gilbert.

Mr Rodgers, 47, has been MP for Teesside, Stockton, since 1974 after 12 years of representing Stockton-on-Tees. Politically right of centre, he led the Campaign for Democratic Socialism in support of the late Hugh Gaitskill in the early sixties.

An economic consultant, he was general secretary of the Fabian Society for seven years to 1960. He was Parliamentary Under-Secretary, Department of Economic Affairs, from 1964-67, then at the Foreign Office. He was Minister of State, Board of Trade, in 1968, and at the Treasury in 1969.

The new Parliamentary Secretary at Transport, Mr John Horam, MP for Gateshead West, who has been promoted from the back benches is also a Right-winger.