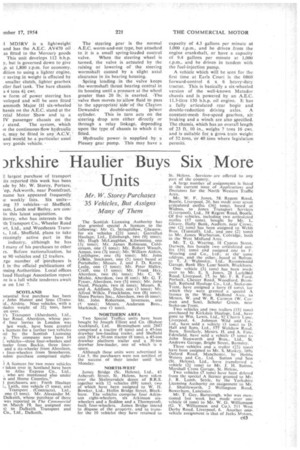 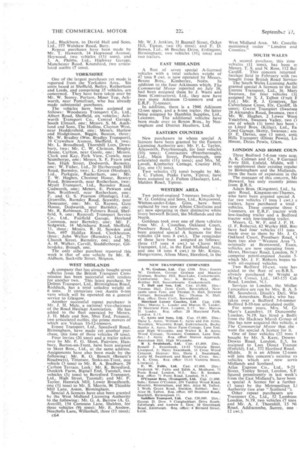 Mr. W. Storey Purchases• 7 35 Vehicles, But Assigns• Many of Them

itorey, who has .interests in the th Transport Co., Wheeler Road irt, Ltd., and.Woodseats Trans)„ Ltd., Sheffield, plans to fake reasingly active part in the industry, althaugh he. has many of his purchases to other rs. Before nationalization, he se 90 vehicles and 12 trailers. .rge number of ,'ptirchases is 1. in the official publications of Msing Authorities. Local offices toad Haulage Association report re is a lull while tenderers await a on List 7.

SCOTLAND istantial first purchase has been John Hunter and Sons (Transid., Airdrie.. Nine vehicles, with a [laden weight of 321 tons, have en over.

)'s Transport (Aberdeen), Ltd., tsar Road, Aberdeen, whose our1 four lorries in London was last week, have been granted k licences for a further two vehicles Ls) by the Scottish Licensing y. This company now have 14 vehicles—three four-wheelers and heeler from Buckie, three fourand a six-wheeler from Aberdeen, [ four-wheelers from Stonehaven. ndon purchase comprised eight

.] A licences for two more vehicles [ taken over in Scotland have been to Atlas Express Co., Ltd., , who are mentioned also under n and Home Counties,"

t purchasers. are: Forth Haulage L, Leith, one vehicle (5 tons), and Transport (Contracts), Ltd., one (3 tons). Mr. Alexander M. Dalkeuft, whose purchase of three was reported in The Commercial an March 19, has assigned one sl to Dalkeith Transport and Co., Ltd., Daikeith.

Although these units were advertised in List 5, the purchasers were not notified of the success of their tender until last Monday.

NORTH-WEST James Bridge (St. Helens), Ltd., 43 Ashcroft Street, St. Helens, have taken over the Skelmersdale depot of B.R.S. together with 12 vehicles (691 tons), two of which have been assigned to W. H. Bowker, Ltd., Hollin Bridge Street, Blackburn. The vehicles comprise four Atkinson eight-wheelers, six Atkinson sixwheelers and a Seddon and a Thornycroft, both four-wheelers. James Bridge intend to dispose of the property, and to transfer the 10 vehicles they have retained to St... Helens. Servicesare offered to any part of the country.

A large number of assignments is listed in • the current issue of Applications and Decisions for the North Western Traffic Area.

Wearing and td.; at the same address, and the Co.,Other,. based at 'Bolton, to T. J. Walrusley, Ltd., Raveiss*otid Garage, Bank Hey Lane-South, Blackburn..

One vehicle (3: tons) has been made over to Mr. E. S. Jones. 28 Larkfttald Road,rtiverpool, 17, by Mr. P. B. Fold, Porlock, Chester Road, Woodford.. Branshall. Rutland Haulage Co., Ltd., Stoke-onTrent, have assigned a lorry (8 tons), for which they were granted a special A licence in the West Midland Area. to Messrs. W. and W. R. Carman (W. Carman and Son), Scholar Green, near S toke-on-Trent.

YORKSHIRE One of the largest purchases yet made is reported from the Yorkshire Area. Six units based at Sheffield, Batley, Rotherham and Leeds, and comprising 35 vehicles, are concerned. They have been taken over by Mr. W. Storey, Portare, Moor Top, Ackworth, near Pontefract, who has already made substantial purchases.

The only other purchase reported this week is that of one vehicle by Mr. R. Aldham, Sackville Street, Skipton.

WEST MIDLANDS A company that has already bought seven vehicles from the British Transport Commission has been successful with tenders for another two. This latest purchase, by Dolton Transport, Ltd., Birmingham Road, Redditch, has a total unladen weight of 6 tons. It comprises two Austin 6-ton vans which will be operated on a general service to Glasgow. Another successful repeat purchaser is Mr. J. H. Male, a national vice-chairman of the Road Haulage Association. He has added to the fleet operated by Messrs. J, H. Male and Son, Shut End, Pensnett, two articulated outfits, the prime movers of which are Vulcan 10-12-tonners.

EAST MIDLANDS A fleet of seven special A-licensed vehicles with a total unladen weight of 42 tons 9 cwt. is now operated by Messrs. Bexon Bros. Kimberley, Notts. In addition to the four Atkinsons which, The Commercial Motor reported on July 16, had been assigned them by J. Watts and Sons (Contractors), Ltd., they now have two more Atkinson 12-tonners and an E.R.F. 71-tortner.

In addition, there is a 1946 Atkinson 12-ton spare, and a 6-ton trailer, the latter being assigned by Hamblin Supplies, Ltd., Leicester. The additional vehicles have been made over to Bcxon Bros., by Nottingham and District Hauliers, LtcL EASTERN COUNTIES New purchasers to whom special A licences have been granted by the Eastern Licensing Authority are: Mr. F. L. Taylor, Ailesworth, Peterborough, for four vehicles (101 tons); Contractors (Peterborough), Ltd., Main Street, Peterborough, one articulated outfit (111 tons); and Mrs. M, Lovell, Kimberley Cottage, Cranley Hill, Eye, one (31 tons).

Goldings took over one of these 1,ehieles from Mr. J. Costelloe, Oakland Court, Prestbury Road, Cheltenham, who has been granted special A licences for five vehicles (24 tons 8 cwt.). The remainder of these have been assigned as follows: three (17 tons 4 cwt.) to Cleeve Hill Transport, Ltd., in the East Midland Area, and one (4 tons 4 cwt.) to Mr. Knipe, Hungerstone, Aliens More, Hereford, in the

A second purchase, this time vehicles (11 tons), has been m Messrs. T. S. and N. Ross, 112 But Cardiff. This concern returned haulage field in February with tw( bought from British Road Service!

LONDON AND HOME COUN Three Bedford 5-6-ton vans acqi. A. K. Colman and Co., 9 Garnaul Forty Hill, Enfield, Middx, will I to supplement their existing regular to Birmingham and the Midlands, form the basis of expansion in the The manager of this concern, Mr Howard, has only recently joinet from 11.R.S.

Services to London, the Midlar Lancashire are run by Mrs. B. A. S (W. Saunders),Dinah's Dell, Win

Amersham. Bucks, who has taken over a Bedford 5-6-tonner Bedford 8-10-ton articulated outfit.

For some years, Mrs. M. Gr Mary's Laundry), 18 Duncombe London, N.19, has hired a Bedfc from the Hackney Marsh Group of She has now acquired this vehicle, a The Commercial Motor that she want the special A licence for it.

Atlas Express Co., Ltd., 9-21 Street, Tooley Street, London, S.E figured prominently in last week's from the East Midland's, have been a special A licence for a further (3 tons) by the Metropolitan Li Authority (see also " Scotland ").