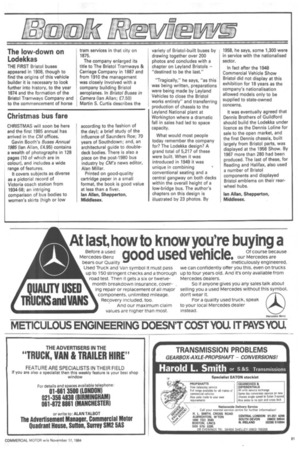 THE FIRST Bristol buses appeared in 1908, though to find the origins of this vehicle builder it is necessary to look further into history, to the year 1874 and the formation of the Bristol Tramways Company and to the commencement of horse tram services in that city on 1875.

The company enlarged its title to The Bristol Tramways & Carriage Company in 1887 and from 1910 the management was closely involved with a company building Bristol aeroplanes. In Bristol Buses in Camera (Ian Allan; £7.50) Martin S. Curtis describes the variety of Bristol-built buses by drawing together over 200 photos and concludes with a chapter on Leyland Bristols — "destined to be the last."

"Tragically," he says, "as this was being written, preparations were being made by Leyland Vehicles to close the Bristol works entirely" and transferring production of chassis to the Leyland National plant at Workington where a dramatic fall in sales had led to space capacity.

What would most people today remember the company for? The Lodekka design? A grand total of 5,217 of these were built. When it was introduced in 1949 it was unique in combining conventional seating and a central gangway on both decks within the overall height of a low-bridge bus. The author's chapters on this design is illustrated by 23 photos, By 1958, he says, some 1,300 were in service with the nationalised sector.

In fact after the 1948 Commercial Vehicle Show Bristol did not display at this exhibition for 18 years as the company's nationalisation allowed models only to be supplied to state-owned concerns.

It was eventually agreed that Dennis Brothers of Guildford should build the Lodekka under licence as the Dennis Loline for sale to the open market, and the first Dennis chassis, built largely from Bristol parts, was displayed at the 1956 Show. By 1967 more than 280 had been produced. The last of these, for Reading and Halifax, also used a number of Bristol components and displayed Bristol emblems on their rearwheel hubs.