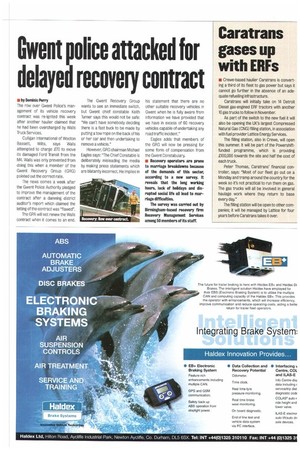 Page 11, 17th May 2001 — Gwent police attacked for delayed recovery contract
Close
Noticed an error?
If you've noticed an error in this article please click here to report it so we can fix it.
Keywords : Monmouthshire, Gwent, Gwent Police, Newport, Torfaen, Vehicle Recovery

The row over Gwent Police's management of its vehicle recovery contract was re-ignited this week after another haulier claimed that he had been overcharged by Walls Truck Services.

Culligan International of Wooton Bassett, Wilts, says Walls attempted to charge .270 to move its damaged Ford Transit from the M4. Walls was only prevented from doing this when a, member of the Gwent Recovery Group (GRG) pointed out the correct rate.

The news comes a week after the Gwent Police Authority pledged to improve the management of the contract after a damning district auditor's report which claimed the letting of the contract was "flawed".

The CPA will not renew the Walls contract when it comes to an end. The Gwent Recovery Group wants to see an immediate switch, but Gwent chief constable Keith Turner says this would not be safe: "We can't have somebody deciding there is a fast buck to be made by putting a tow rope on the back of his or her car and then undertaking to remove a vehicle."

However, GRG chairman Michael Eagles says: "The Chief Constable is deliberately misleading the media by making press statements which are blatantly incorrect. He implies in his statement that there are no other suitable recovery vehicles in Gwent when he is fully aware from information we have provided that we have in excess of 60 recovery vehicles capable of undertaking any road traffic incident."

Eagles adds that members of the GRG will now be pressing for some form of compensation from the Gwent Constabulary.

• Recovery operators are prone to marriage breakdowns because of the demands of this sector, according to a new survey. It reveals that the long working hours, lack of holidays and disrupted social life all lead to marriage difficulties.

The survey was carried out by Birmingham-based recovery firm Recovery Management Services among 50 members of its staff.